Ever since the  Motorola Xoom was released and hearing wind of an inevitable Galaxy Tab 10.1, there was no question in my mind…the Galaxy Tab 10.1 was to be my first Android-powered tablet, and my replacement for my iPad 2.  I previously posted the ‘Not your ordinary guide to buying your new tablet’  which was basically my opinion on how far ahead the iPad 2 was, compared to the other Android tablets that were available in the market. (at that time).  Did the Galaxy Tab 10.1 live up to my ‘high’ expectations? Has it swayed my opinion from my previous post?

The Galaxy Tab 10.1 is packed with many features that are found in other tablets in the market today.  At some aspects, the Galaxy Tab even improved on most of these features.

Although both tablets are capable of shooting at 720P resolution, the camera is also better on the Galaxy Tab.  The rear camera is shooting at 3.0 MP with 2.0 MP in the front as opposed to the iPad 2’s 1 MP rear camera (at best, technically speaking it is .7) and VGA up front.  VGA works out to .3 MP. They both share the same Wifi Band (A\B\G\N) except the Tab 10.1 is dual-band as well as having the ability of sharing the WiFi network through Android’s native HotSpot capability.

Other difference is the Bluetooth connectivity (3.0 to 2.0) and the dual speakers located on each side of the Galaxy Tab as opposed to the iPad 2’s single speaker located in the rear.  The strategic location of the speakers gives the tab the Stereo speaker sorround-sound feeling. For you Android fans out there, it is needless to say that one other difference (advantage) over the iPad 2 is the ability to run Flash-enabled sites. A known “issue” with any of Apple’s products.

When comparing the Galaxy Tab 10.1 to Motorola’s tablet offering, the Motorola Xoom has very few differences. Some lean towards the Xoom but most of them are in favour of the Galaxy Tab.

They both share the same 10.1” screen size and resolution.  The specs are practically the same except for Bluetooth 2.1 and the camera. The Xoom is shooting at a respectable 5.0MP.  Another advantage, or maybe even a disadvantage depending on who you talk to, is the pending release of the TouchWiz UX User Interface for the Galaxy Tab.  It has yet to be released but Samsung’s UI has earned some respect in the Android world putting it up there right beside the popular HTC Sense UI.  I personally am a Vanilla Android user but since trying the HTC Sense UI, I enjoyed it very much.  If the TouchWiz UI that is coming out for the Galaxy Tab is half as good as I’ve seen on video reviews, then I definitely am looking forward to the improvement this will add to the already amazing device.

The 3 tablets are all running dual-core processors and they’re all taking advantage of it fully.  The Galaxy Tab is using a 1 GHz Arm Cortex-A9 ULP GeForce GPU Tegra 2 Chipset processor, the Xoom is using a 1 GHz NVIDIA Tegra 2 AP20H, while the iPad 2 is running on 900 MHz ARM Cortex-A9 PowerVR SGX543MP2 GPU, Apple A5 chipset.  For battery life they all last approximately the same amount of time which is approximately 10 hours of general usage.

Now that we have the numbers crunched up, based on paper, you can definitely see the advantage of a later release, where the Galaxy Tab was able to ‘up the ante’ on the others.  However, the other part that is equally important when comparing these tablets is the Operating System and how well it functions for daily use.  While Android has it’s great features such as Widgets, and full customization, iOS has its fluidity and of course the vast number of well-built apps available at your disposal. This is where the saying “beauty is in the eye of the beholder” comes in to play. 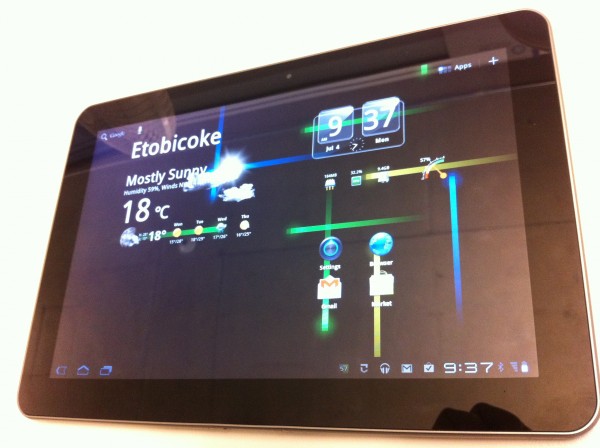 Former Founder of Mobile blog site MGauge.ca is the Managing Editor for TekTok.ca A smartphone fanatic which started with the iPhone 3G to multiple Blackberry and Android Devices. Willingly sacrificed an arm (and possibly a leg) in order to save his iPad 2.
@@Cue_32
Previous Samsung Galaxy S 2 Media Event Planned
Next Samsung Galaxy S 2 Available July 21 in Canada