The cast of Back to The Future was reunited this week in the 2nd episode of Josh Gad’s ‘Reunited Apart’ Youtube channel. Several cast members including Michael J. Fox, Christopher Lloyd, Lea Thompson, as well as director Robert Zemeckis and Oscar-nominated screenwriter-producer-director, best known as co-creator, co-writer and co-producer of Back To The Future Bob Gale, were all a part of this glorious reunion and we have left a few big names out as not to spoil it.

Gad, known for his roles in Jobs, The Internship, Wish I Was Here, The Wedding Ringer, and also as the voice of Olaf from the Frozen movies, was able to reunite the cast of the 1985 cult classic The Goonies in his first ever episode.

To close the segment, Gad had the cast of the Back To The Future The Musical perform “The Power of Love” which was written for the original soundtrack. The musical put on by Manchester Opera House had to postpone further shows due to COVID19 so it was great to see the cast able to perform through Zoom.

Without further ado, we present Episode 02 of Reunited Apart.

Josh, keep doing what you do. We need lots more of this.

UPDATE: Where is Biff you may ask? He was not available for the call but he did take some time out of his schedule to call Gad and complain.

Jamie Forestell is the Editor-in-chief and also the founder of Tek Tok Canada. His knowledge and aptitude for Technology led him to create a central website for all Canadians. His strong passion for the Technology world helps him stay abreast of leading-edge technologies and his desire to spread this information was the driving factor behind the creation of Tek Tok Canada.
@tektokca
Previous Kevin James Edits Himself Into Movies and it is Epic
Next FeiyuTech Announces Affordable AK2000C DSLR Gimbal 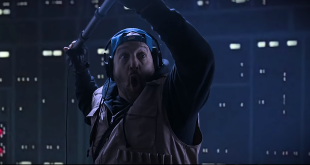 Kevin James Edits Himself Into Movies and it is Epic

You may know Kevin James from King of Queens, Hitch, Grown Ups, or Paul Blart: …