We recently reached out to one carrier specifically to report higher then normal data usage and the carrier refuted that there is no issue on their network. So this led me to do some more research and contact several of our readers for feedback. In every case, every user is also above the average and in a few cases, over their allotted bandwidth.

The carrier provided me with a guideline within 5 minutes of my reaching out, which could confirm they are receiving high amounts of calls for the issue and are quick to disregard this as an issue. Why not right? Overage charges are great for business!

My own device is an iPhone 5, obviously running iOS6, and on the Rogers network. I am provided with 6GB of data for $30 per month. Now, keeping in mind this device now has LTE, the temptation to download more is there for sure since I know the speeds are near quadruple the speeds from previous models. Also keeping in mind there is still a 50MB limit on the appStore that prevents us from downloading the larger items, so technically the only difference for me as a heavy user, is that I get my small downloads quicker, and my emails quicker.

Two weeks into using the iPhone 5, I received a warning I was 75% of my data limit, so I wondered what had changed with my habits: Perhaps I started receiving ALOT more emails, or surfing the websites MORE since I could access them quicker, but all in all nothing has changed. I still use the iPhone the same way I have used an iPhone since my first iPhone Edge (yes the USA model with the hypercard).

So I decided to clear my data usage from both the iOS Usage, and also the DataMan settings which is an app I purchased a while back which identifies both cellular and wifi bandwidth and also monitors to ensure you do not go over the quota.

Here is what I found in one days worth of monitoring: 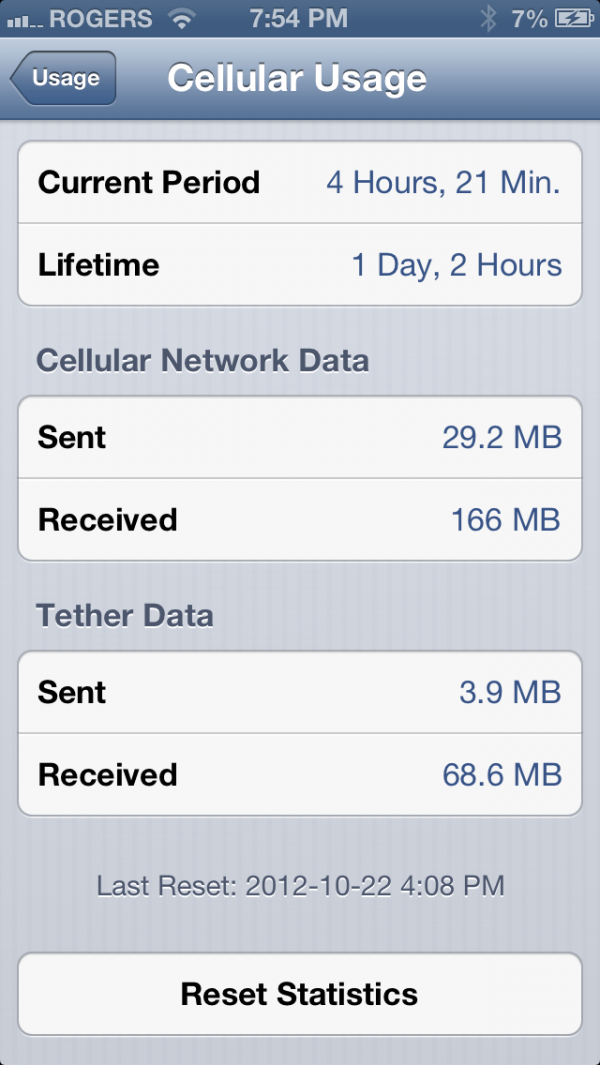 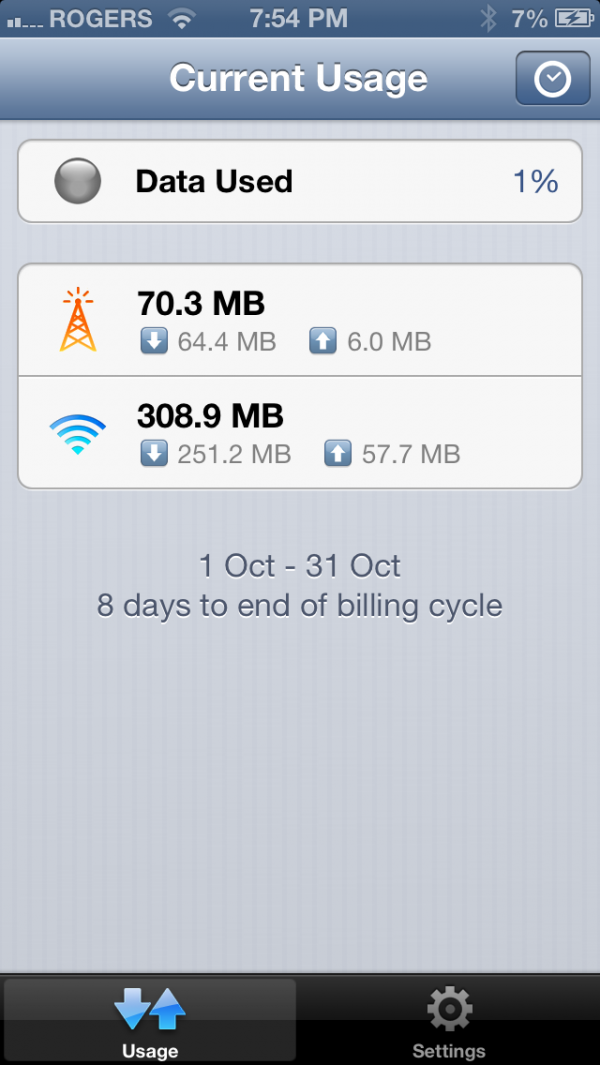 So I encourage you, if you are encountering this issue, please install a data manager and track your usage. Please report your results here in the hopes Apple does see them. We have verified this with several users and so far, our results indicate higher then normal usage with both Rogers and Telus. Our tests have only been performed with iPhone 5, so please keep this in mind as we are only assuming this is an issue with iOS6. It could be an issue with the iPhone 5, or a combination even of iPhone 5 with iOS6, but according to reports in the USA, this could be related to the issues they too are experiencing.

It was suggested that I ensure iTunes Match is not set to sync during cellular usage and I confirmed in my case it was indeed not enabled. Rogers had also requested I turn location services off as they believe alot of the data could be being consumed. I ruled this out by utilizing the same test in DataMan. With Location Services all enabled, I noticed cellular traffic despite being in wifi mode. By turning some more of the location services off, I continued to see data under the cellular column again while wifi was enabled. And lastly, with location services completely off, data was still being transmitted via cellular. It appeared every 30 seconds approximately 4KB of traffic was going through and showing as cellular. Wifi was also going up as it should but why was cellular affected?

So I do not know what this means, but I do know, Rogers has billed me $30.10 for going over by .3 of a GB. Yes, thats 300MB or in appStore standards, 6 full size 50MB apps. I would hope this will be refunded to me but is it up to the carrier to refund this or should this be up to Apple?

Numerous threads have been opened on the Apple discussion board and it would appear there is still no answer provided to address this.

Please fix this before it gets worse! Rogers, Telus, if you are noticing a high amount of calls, please start trending the issue and take charge of the situation. I always say it is better to be proactive then reactive, hence this article being posted before I reach out to Apple. I did try to reach out to the carrier first since I am their customer but I do have to find humor in Rogers suggesting my habits have changed and perhaps I am doing more gaming or texting then I did for the last three years.

And, I would also like to address my concern with the new iPad 4th generation while I have your attention. So Apple releases an iPad 3 claiming LTE is great and promises awesome speeds..until Australia threatens legal action due to false advertising as the LTE will not work with their spectrum..so the fix here.. Apple has decided to address the LTE issue, slap a better camera in, improved Wifi, and faster processor and call it a 4th generation device? Six months after the iPad 3 was launched? Now if Apple was keeping the iPad 3 on the shelf, I could see this as not admitting fault, but the fact that the iPad 3 is being replaced with the new device would indicate Apple has basically performed what the automotive industry would refer to as a “Product Recall” but they were able to get away with replacing the affected devices? I am not running out to purchase the new iPad and I am sick to think that the rug underneath the iPad 3 owners was pulled, but can you blame me?

It has also come to our attention, Apple will be refunding and accepting exchanges from anyone who purchased an iPad 3 within the last 30 days allowing them to swap for the new 4th gen iPad. Really Apple? 30 days? Why not 180 days and do the right thing.

Oh, and while we are on the subject, I am really loving my iPhone 5, but I still strongly suggest Apple provide one free lightning to usb adapter free. I wrote to Tim Cook but of course got no response and I really think Apple needs to pick their head up a bit if they want to stay in the game. It’s the little things that matter, like including a dam screen wipe finally! Little things man! And if I am correct, Steve Jobs was all about the little things wasn’t he?

UPDATE #1: One reader who is a Telus customer, confirmed the data seems to be leaking during the midnight hours as he is sleeping. In the last 3 days alone, his device has reached 1.3GB of cellular data. So what is causing this mysterious data leakage with iOS6? It also seems like similar symptoms are being noticed in the USA on iPhone 4S devices as well as iPhone 5.

UPDATE #2 – Rogers has just released a carrier update. The update is labeled Rogers 13.1 and can be updated by going to your settings->general->about. You should see that you are currently running Rogers 13.0 and will get a Carrier settings update prompt. According to one of our readers, after performing the update you may notice you are stuck to 3G mode and not LTE. By performing a restart it should resolve any issues and resume in LTE mode. (thanks Rory!) 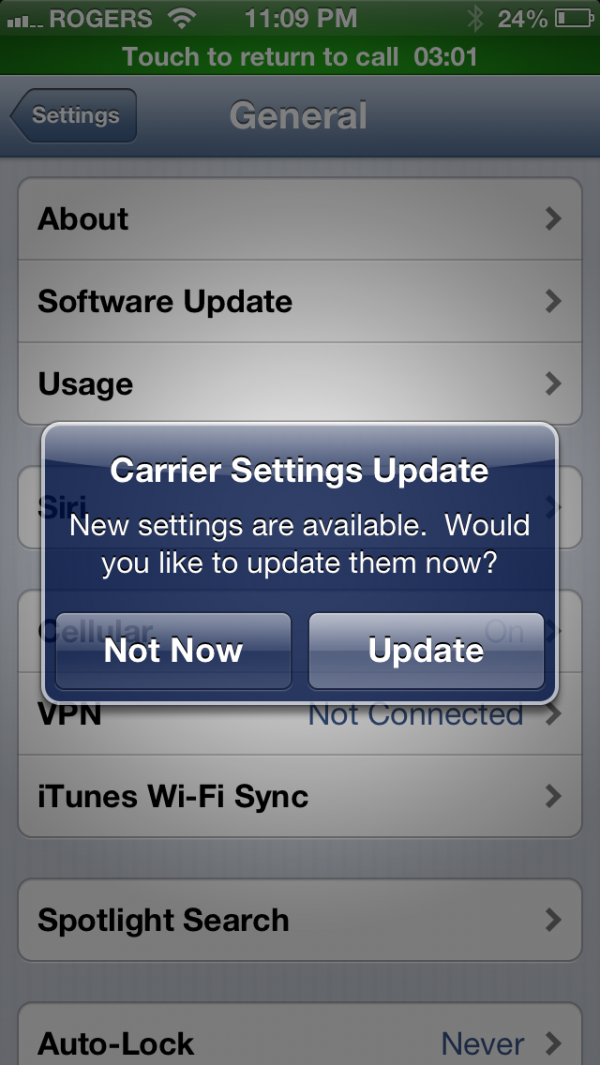 We have reached out to Rogers tech support who were not quite sure what the update contains and suggested we contact Apple?!? In any case, we will be reaching out to Rogers to confirm if this addresses the wifi bug that Verizon noted. Coincidentally, Verizon’s carrier update fix was also version 13.1. Will Rogers be accountable for the data overage charges? We think yes! What do you think? Should Rogers be performing more tests before launching the devices to the public? Telus, you are not off the hook either! Perhaps we should see a Telus carrier update coming soon? Fido has also released an updated version 13.2. Stay tuned as always! Please comment, as Rogers will be looking for trends and the more experiencing the issues, the more serious they take the issue.