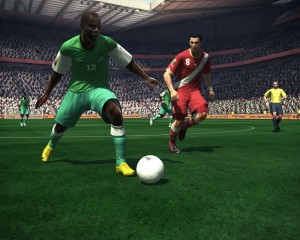 Just weeks after the console launch for Pro Evolution Soccer 2012, Konami has announced the availability of PES 2012 for the Android community.  Sony Ericsson Xperia Play owners can enjoy PES 2012 exclusively for a short period before being available on more Android devices.  Current device owners can find the title on the device’s game launcher.

PES 2012 includes Super Challenge Mode, allowing you to purchase players and build your own custom team. You can also play online against your friend and with Facebook integration, post the results right to Facebook for bragging rights.

We are in the process of reviewing PES 2012 for the Playstation 3 and can hopefully bring you our review for the Xperia Play Android version as well.

For more information, you can visit the Sony Ericsson blog.

PES 2012 features improvements from its predecessor, PES 2011, including enhanced player AI, speed, animation and physics, as well as optimised PlayStation® Certified controls to provide the fullest gameplay experience. Announced features of the title have already been well received by fans and reviewers alike.

PES 2012 will also be exclusively licensed by UEFA, featuring the UEFA Champions League, The UEFA Europa League and the UEFA Super Cup.

“PES 2011 was a popular title on the Xperia™PLAY and demonstrated just how much value the dedicated game controls can bring to sports titles, where skills and technique need controls that allow that extra responsiveness,” commented Tim Harrison, Head of Content Marketing & Strategy at Sony Ericsson. “PES 2012 is another step up in this legendary football franchise, and demonstrates our commitment to building an outstanding games ecosystem for Xperia PLAY.

“The wealth of new features and improved graphics and gameplay makes PES 2012  an exciting prospect for PES fans, old and new,” said Philippe Rapin, Head of Mobile at Konami Europe. “We’re looking forward to working with Sony Ericsson and bringing this next iteration of this famous franchise to the Xperia™PLAY.”

Xperia™ PLAY is proving to be an attractive platform for games developers, from both a usage and download perspective. 80* per cent of owners of the device are playing games at least once per day (eight times more than on other leading smartphones), with 75** per cent of downloads being premium paid for content against the industry average on other top end handsets of 25 per cent.

PES 2012 will enjoy a short exclusive on Xperia™ PLAY before being launched on other Android devices.

Sony Ericsson is a 50:50 joint venture between Sony Corporation and Telefonaktiebolaget LM Ericsson. In October 2011 it was announced by Sony and Ericsson that Sony will acquire Ericsson’s stake in the company and that Sony Ericsson will become a standalone division within Sony Corporation. The transaction is expected to close at the beginning of 2012 and is subject to regulatory approvals. Over the years Sony Ericsson has brought together the best communication technologies with superior entertainment user experiences to create its Xperia™ line of the ‘most entertaining smartphones’  in the industry. With its global corporate functions in London, Sony Ericsson has sales and marketing operations in all major regions of the world, as well as manufacturing in China, and product development sites in China, Japan, Sweden and Silicon Valley, California.  For more information, please visit: www.sonyericsson.com/press.