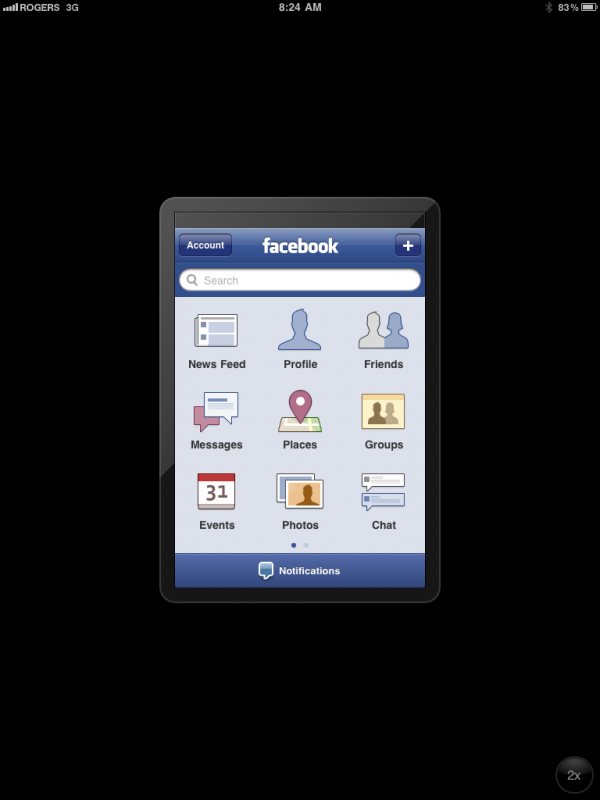 If you can recall the official iPad announcement, Steve Jobs confirmed that several big apps have already been developed to include native iPad support. And for any iPhone apps not yet designed for iPad, they would all still work, and work well. For anyone that has used Facebook for iPhone on their iPad or iPad 2, you will know while the app does work, it does not look pretty.

With the launch of the RIM Playbook and Facebook releasing an official Facebook application for the Blackberry Tablet weeks after launch, I was confused why we still had to resort to 2X viewing or by viewing the full version of the website in Safari.

According to various sources, Facebook is close to launching the iPad specific Facebook aplication and early reports indicate there are many features not available via the Facebook website which integrate the built in cameras on the iPad 2.

No date has been announced for the availability so keep your eye on the AppStore as Apple will be featuring the application prominently.

Jamie Forestell is the Editor-in-chief and also the founder of Tek Tok Canada. His knowledge and aptitude for Technology led him to create a central website for all Canadians. His strong passion for the Technology world helps him stay abreast of leading-edge technologies and his desire to spread this information was the driving factor behind the creation of Tek Tok Canada.
@tektokca
Previous Sasktel confirms Samsung Galaxy S II coming to Canada in July
Next Nexus 4G – Another Android comeback to upcoming iPhone 5(4S)