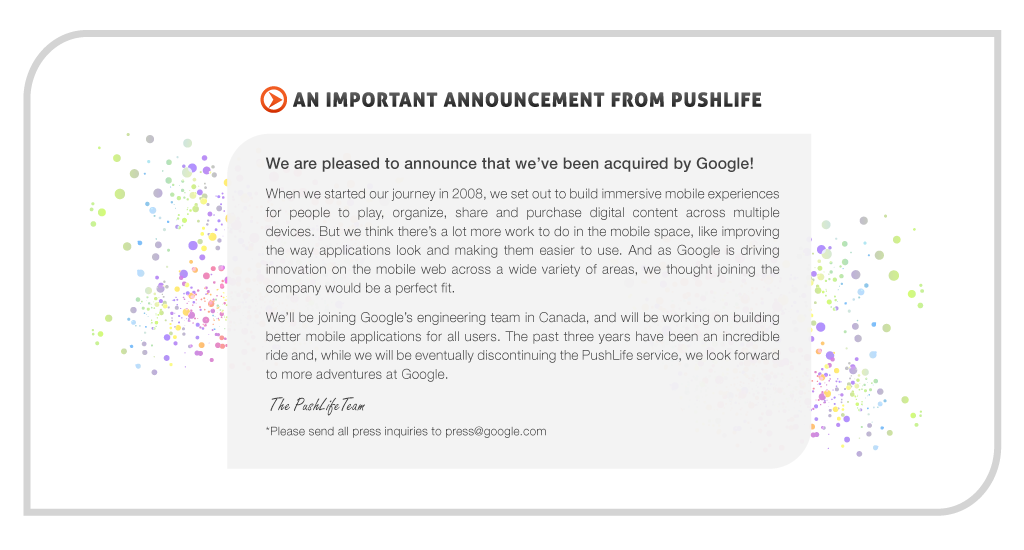 Google is preparing to have their own sync-to-mobile music app, and an interface for their Cloud media service. With the acquisition of PushLife, it looks like they’re preparation is almost complete.

PushLife, a desktop-enabled mobile service is capable of syncing your non-iDevice smartphone (Blackberry, Symbian or Android) to sync with iTunes and transfer your music and playlist flawlessly.
A user plugs their PushLife-enabled phone into their desktop computer, just like they would an iPod. The PushLife desktop plug-in automatically starts and syncs with iTunes™ and Windows Media Player™.

Heading over to the PushLife website today will direct you to the official message regarding Google’s takeover.

Founded by a former Research In Motion employee, Ray Reddy. Toronto based PushLife was purchased by Google for USD $25 Million. Stay tuned for more details.

Former Founder of Mobile blog site MGauge.ca is the Managing Editor for TekTok.ca A smartphone fanatic which started with the iPhone 3G to multiple Blackberry and Android Devices. Willingly sacrificed an arm (and possibly a leg) in order to save his iPad 2.
Previous Apple iPad 2 online orders begin shipping to Canada
Next Sony Ericsson report supply issues as a result of the Japan Earthquake