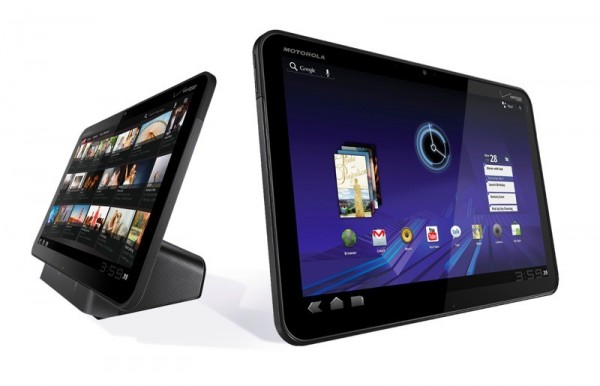 Today Motorola has finally announced the wide availability of the Motorola Xoom tablet in Canada. The 10.1″ Android tablet is available for purchase starting at $596 at a number of retailers in Canada including Costco, Walmart, London Drugs, Bureau En Gros, Staples, Sears Canada, Amazon.ca, Best Buy, Future Shop and TELUS.

We got a few minutes of hands on time with the Motorola Xoom when it launched at Best Buy in April but we are still waiting for our review unit. On paper the Motorola Xoom matches and in some cases exceeds that of the Apple iPad.  Stay tuned for our full review. And in the meantime, we hear the SD slot may work as of June with an update according to Motorola Canada.

Called the “the most potentially disruptive technology” by CNET at the 2011 Consumer Electronics Show, the Motorola XOOM with Wi-Fi showcases the innovations of the Honeycomb user experience – including widgets, true multi-tasking, browsing, notifications and customization – on a 10.1-inch widescreen HD display, enabling video content that’s richer and clearer than ever before. Support for HDMI enables viewing of videos and movies on larger screens, such as HD televisions. A 5 MP rear-facing camera captures HD video and 2 MP front-facing camera enables clear video chats using Google Talk™.

The Motorola XOOM with Wi-Fi also features a built-in gyroscope, barometer, e-compass, accelerometer and adaptive lighting; Motorola XOOM is leading the tablet revolution. Motorola XOOM supports up to 10 hours of video playback and charges in nearly half the time of competitive tablets on the market.

Motorola XOOM features an ecosystem of intelligent accessories to enhance the tablet experience:

Jamie Forestell is the Editor-in-chief and also the founder of Tek Tok Canada. His knowledge and aptitude for Technology led him to create a central website for all Canadians. His strong passion for the Technology world helps him stay abreast of leading-edge technologies and his desire to spread this information was the driving factor behind the creation of Tek Tok Canada.
@tektokca
Previous Sony Ericsson Canada website hacked
Next In Depth Review : HTC Incredible S