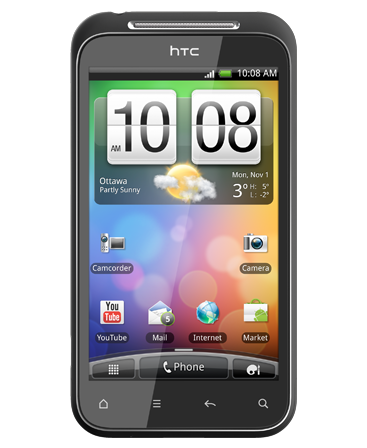 Weighing in at 135.5 g, and a 120 x 64 x 22.7 m dimension, this device has a very solid build like many other HTC devices.  Although it doesn’t have the same metallic frame similar to the HTC Desire, Desire HD or even the Nexus One, the phone’s backing has a unique feel, like a matte, solid rubber. Also on the back you’ll find the rear speaker, an 8MP camera with Auto-Focus, and a dual LED flash that allows you to take photos and video even in the darkest of night.  I was able to take a photo of a room so dark that I wasn’t able to see what I was actually taking a picture of. After the flash kicked in, it lit up the whole room.  The quality it displayed on the 800×480, 4” Super LCD WVGA display was so clear, you couldn’t tell the room was pitch black.

Along with the earphone jack, the power button can be found on top, and the volume rocker on the left side of the device is also made of the same hard rubber, making it hidden at a moments glance.  However, once pressed, it has a clicking feel that you will definitely know you’ve engaged it. Also on the same side of the volume rocker you’ll find the micro-USB port for charging\syncing.

On the bottom you’ll find the microphone and the slot to remove the battery cover.  A nice addition that HTC has included in the Incredible S is the dual-microphone for noise-cancellation.  This can be found as the 2 tiny holes near the bottom on the back of the device.

To go with its ‘camouflage’ look, the front of the phone is where it gets interesting.  Aside from the usual speaker nearly an inch and a half long found on the top of the device and the HTC brand directly below it, there really isn’t much to see on the front.  Surrounding the 4” screen is a plain black bezel that is plain when the phone is in sleep mode.  However, one click on the sleep\wake\power button will reveal the 4 capacitive buttons generally associated with most Android-powered device. The ‘Home’, ‘Menu’, ‘Back’, and ‘Search’ buttons reveals itself only when the phone is awake. If you’re a fan of a clean, smooth look for your phone, this one is definitely it. 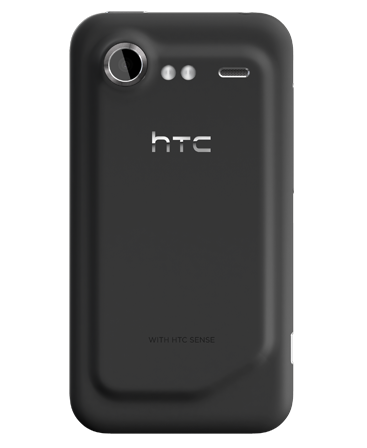 Powered by Android 2.2.1 (codename Froyo), its heart is a 1 GHz Scorpion processor, next-generation Qualcomm MSM8255 Snapdragon, with Adreno 205 GPU. On top of that is has 768MB of RAM and 1.1GB of internal storage. Networks include HSPA/WCDMA and quadband GSM/EDGE, along with WiFi b/g/n and Bluetooth 2.1, and there’s GPS, a digital compass, g-sensor, proximity sensor and ambient light sensor. What does that all mean??  Well, it means its FAST. If you’re concerned about battery drain, HTC got that covered too.  With a larger battery at a whopping 1,450 mAh, you’re certain to enjoy it for the whole day.

Although it doesn’t have the latest dual-core processor that is becoming more common nowadays, the next generation Snapdragon processor is very well tuned for a lag-free processing that is fully capable of running any game I throw at it. Running the NeoCore test (found in the Android Marketplace) was flawless and stunning to watch. (Nothing like watching an interplanetary robot destroy buildings while tanks fire at it with primitive weapons).

Along with the specs mentioned above, the newer version of HTC Sense is outstanding as always. To learn more about the latest HTC Sense, click the direct link to HTC’s website for full details.

This device is available at Bell Mobility for:

Former Founder of Mobile blog site MGauge.ca is the Managing Editor for TekTok.ca A smartphone fanatic which started with the iPhone 3G to multiple Blackberry and Android Devices. Willingly sacrificed an arm (and possibly a leg) in order to save his iPad 2.
Previous Motorola Xoom now widely available in Canada
Next Rdio On Demand Streaming Music Service available in Canada