This Saturday, Sunday or Monday, take in ANY used title for the Xbox 360, PlayStation 3 or the Wii U, and you can choose one of the following current gen games for FREE. (Obviously not the hardened, prestige, or limited versions)

Futureshop spokesman, Elliott Chun has confirmed the promotion is in deed true and we are shocked as well.

While many gamers will be looking to purchase the new gen versions, this is still a great deal for those that are not taking the early plunge, or for gamers who would like to offset the cost to purchase the next gen versions in the coming weeks. The only caviat is that this promition is valid for one free game per person, per store. So hopefully you have a few store locations you can visit and take advantage of the deal multiple times.

Head over to Futureshop or Best Buy this weekend and get your free trade in!

* Trade ANY one game on Xbox 360, PlayStation 3, WiiU, PS Vita or Nintendo 3DS and get a FREE copy of Assassin’s Creed IV, Battlefield 4 or Call of Duty: Ghosts (Xbox 360, PS3 WiiU versions only, excludes next generation consoles – PlayStation 4 and Xbox One. Regular $59.99 versions only). That’s right, bring-in any game title on the console or handheld console and you get three of the holiday’s hottest titles for free. Limit one per customer, per title – games must include cases – and no duplicates accepted.

UPDATE #2 There are massive amounts of people lining up and only limited quantity. There is a great chance you will not get a copy so be prepared for disappointment. 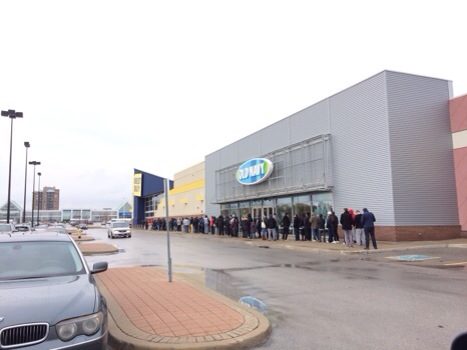 Jamie Forestell is the Editor-in-chief and also the founder of Tek Tok Canada. His knowledge and aptitude for Technology led him to create a central website for all Canadians. His strong passion for the Technology world helps him stay abreast of leading-edge technologies and his desire to spread this information was the driving factor behind the creation of Tek Tok Canada.
@tektokca
Previous UPDATE: Pebble Smartwatch -Major Announcement
Next Call of Duty Ghosts Out of Map Glitches Reported