The NHL Image is Shifting 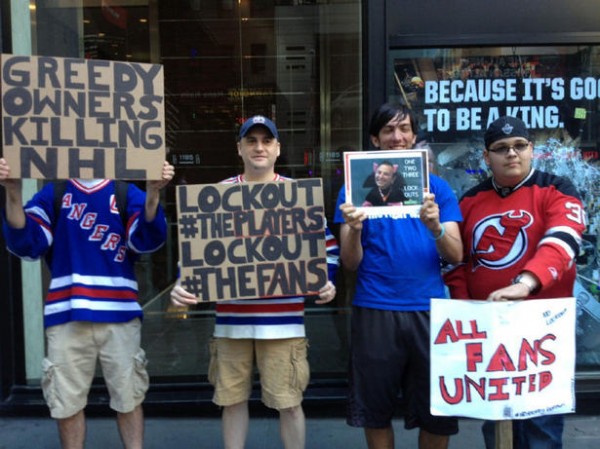 Has there ever been a circumstance where one entity completely flipped the court of public opinion as quickly as the NHL, and specifically Gary Bettman, just did? There wasn’t many people on the owner’s side this time.

The NHL had all the support back in 2004 as we could all see the league was struggling. The owners used the full year lockout to get what they thought was a sweetheart deal. The word Bettman continuously used was, “Linkage”. They needed linkage from revenue to the player’s rate in pay. The owners got that with a salary cap. Win for the owners! But wait, revenues went through the roof. The Canadian dollar having a lot to do with that. With the salary cap going sky high, the salary floor went to levels the bottom revenue teams couldn’t afford to get to. The linkage wasn’t working.

During these new negotiations the fans were split as long as there was no lockout. “Who cares as long as we see hockey”, most would say. It all changed on September 15th. The day the NHL locked out its players. The players, the fans and the media were roasting the NHL for saying a deal they won just wasn’t good enough anymore. They were not happy that for the second time in 7 years and the third time in 18 years the NHL was locking out its players. Can’t Gary Bettman get the owners all on side to make a deal? The unwillingness to make legit offers and negotiate in good faith also contributed to the poor public image.

Yesterday, there were reports from Deadspin, the NHL had put together some focus groups. Some of the questions in those focus groups had to deal with the NHL’s and Gary Bettman’s public image. A day after this news broke the NHL offered what seems like a deal that can be worked with.

50/50 Split in Hockey Related Revenue: This seems like it was always going to be the number. That is what was so frustrating to the average fan. Why not start here and negotiate from here. Now 31 days of wasted time on the part of the deal we all knew would wind up here.

3 years max entry level deals: This is the same as it is now. It favours the players as it brings them to bigger money faster. I’d like it to be 4-5 years myself but this wont hold up the negotiations.

28 years of age or 8 years of service before free agency: This is one year higher than it is now. This may chafe the players a little bit. The goal is always to get to free agency faster. It is only a year more than now, but it may hold up negotiations. It is two years less then the 10 years the owners were originally offering. Meet in the middle with eight? It’s not totally out there.

5 Year Max Contracts: Whoops! There is no way the players will agree to this. It may be negotiated to have a max deal but it wont be anywhere near 5 years. An 8 year max would be a possibility. Even then it’s doubtful. Players never like to make deals that help the owners restrict themselves further. Since the players agreed to a salary cap in the last CBA it is unimaginable they would let the owners protect themselves with a max contract limit of 5 years.

No more burying contracts in the minors: Any player with an NHL contract playing in the minors will count towards the salary cap. Meaning, Wade Redden and Jeff Finger types would count towards their teams respective salary caps. It’s not ideal for the players as these guys would be taking up valuable space on big spending teams’ rosters. But, there are not many teams with the financial clout to really adsorb that kind of hit anyway so it’s unlikely the players will fight tooth and nail against this. Players at the end were getting smart and only signing one way deals, anyway.

These parts of the deal that have been reported, seem to show a willingness of the owners to want to get a deal done. The NHL want a full season and have backtracked on many of their initial demands. This new offer has squarely put the pressure back on the players. If they reject or are unwilling to budge, the media and fans will turn their anger and disappointment the players way. Your move Donald Fehr, just remember, it’s probably best to not rock this boat. Your players are the ones that have to face the fan-atics.

Update: Today the NHL posted the entire CBA on their website. This angered the players as Bettmen has said many times in the past he doesn’t want to negotiate in the public forum. This reeks of another PR move by the NHL, and it’s working.

With the release of the offered CBA the media and fans can see the players will be set up pretty good this year and in the future. This offer would make the salary cap this year, $59.9 million (All figures in USD). However, for this year there are amendments that could have teams spending up to $70 million. Meaning, the players really don’t lose anything monetarily this season. There is no rollback at all. The players said they would not take another rollback and the owners took the demand out. Something that may be a sticking point for the players is the fact the NHL wants to make sure longer term contracts are structured without circumventing the cap.

To do this the NHL has said, the year to year value of a contract cannot vary by more than 5%. This will make sure there are no more of the front loaded contracts making it more fair for the smaller revenue teams (and the teams unwilling to do the contracts like the Maple Leafs). Also, the contracts that have been signed will now be on the books whether that player retires or not. So, even if Luongo is saying he will retire before the end of his contract, even if he does, the salary cap hit is still a factor. These are some of the things the players are going to have to negotiate during the next few days and figure out how far one way or the other they are willing to go.

But, the bottom line is this, the fans see this offer as a win for the players already. If the players are not able to negotiate and get a deal done so there will be hockey on November 2nd, they will be the ones feeling the wrath of fans and media.