Felix Baumgartner is about to skydive from the edge of space breaking the speed of sound while free falling back to earth. His helium filled balloon will take him 120,000 feet above earth which should take approximately 3 hours to reach. He then plans to free fall at supersonic speeds of 690 MPH (Mach 1).  The event originally planned for today has been postponed due to weather and rescheduled  to tomorrow, Tuesday October 9 at 8:30 AM EDT .

Baumgartner completed a test jump and reached an altitude of 96,000 feet before free falling to a successful landing.  By completing the jump at 120,000 feet, Baumgartner would break Joseph Kittinger’s long-standing record for highest skydive of 102,800 feet, set in 1960 as part of an U.S. Air Force research project. Kittinger seen in the video below, is Baumgartner’s mentor and is thrilled to be a part of this.

“I had no idea it’d be 52 years before the record was broken,” Kittinger says. “Felix is the perfect guy to do it. He’s an incredible, trained professional athlete, and he’s dedicated to making a scientific contribution.” 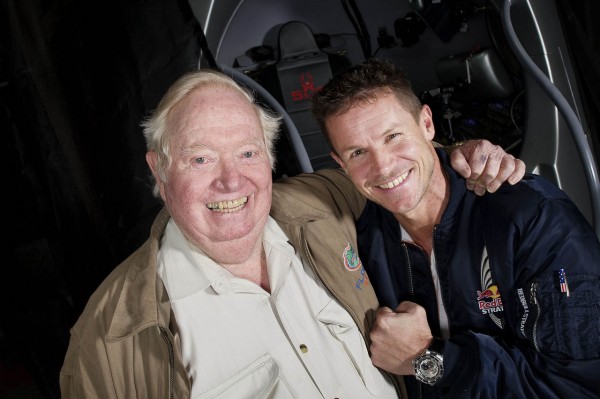 Felix consistently challenges his personal limits while pushing the physical boundaries of human flight. In 2003, Felix completed an unprecedented flight across the English Channel with a carbon wing, and subsequently began to consider an even bigger goal: the supersonic freefall. With a team of the world’s top scientists, engineers and doctors behind him, Felix will attempt to rewrite history and advance aeronautical research with Red Bull Stratos.

You can tune in above tomorrow at 1:15PM EDT to watch the event live, or direct via Youtube or RedBull. The event will also be broadcast live by Sportsnet exclusively for Canadians on Sportsnet East, Ontario, West and Pacific.

On top of all the ground camera equipment, the following equipment has been setup to capture this amazing feat. The live feed will of course have a 20 second delay in the event something tragic does occur.

Here is the launch plan according to the Red Bull Stratos blog… (And you are looking for a scientific explanation of the live jump, check out this article on wired.com)

Launch Minus 24 Hours: Baumgartner will start the day before the jump with a light cardio-based workout, mostly to “relax and loosen up,” according to Red Bull High Performance Director Andy Walshe.

Minus 18h30: The 43-year-old Austrian will return to his hotel to rest up. If he’s not ready to nap, Baumgartner can pass the time talking with his close friends and family, reading messages of support that have been pouring in from around the globe, drawing in his sketchbook – a pastime that he says helps to clear his mind – or mentally reviewing his checklists for the mission.

Minus 13h30: Baumgartner will join members of the crew for a light early dinner, but the food on his plate will be unique. For at least 24 hours before his jump, he must stick to a low-fiber diet prescribed by the mission’s medical team. It is vital for him to eat only foods that will clear his system quickly, without leaving residue that could create gas: a condition that can cause problems in the low-pressure of the stratosphere because it can expand in the body and cause serious discomfort.

Minus 12h00: Baumgartner will attempt to get to sleep early – before the sun has even set. He’ll try to eliminate every glimmer of outside light and shut out the noise of circulation fans or other guests in the halls. It is essential that he try to get some sleep before his pre-dawn wake-up call, even though he will certainly be wondering what he’ll experience in his attempt to become the first person to break the speed of sound in freefall.

Minus 4h30: “When I need be to ready, I’m always ready,” Baumgartner often says. And while he will try to sleep as long as possible, he’ll need to rise four to five hours before dawn to be ready for the intense day ahead.

Minus 3h30: Baumgartner will arrive at the launch site, accompanied by Walshe. Mission team leaders including Col. Joe Kittinger, Technical Project Director Art Thompson, and Meteorologist Don Day will provide a personal briefing on the launch preparations so far, which will have been underway for five hours.

Minus 4h00: Baumgartner will head to the runway where, as is habitual for the experienced pilot before every flight, he will conduct a meticulous inspection of the capsule.

Minus 2h30: In Baumgartner’s personal trailer, he will undergo a final medical check, and a compact, state-of-the-art physiological monitoring system will be strapped to his chest to be worn under his pressure suit throughout the mission.

Minus 2h00: Life Support Engineer Mike Todd will dress Baumgartner in his suit, a painstaking process, and the Austrian will ‘pre-breathe’ oxygen for two hours to eliminate nitrogen from his bloodstream, which could expand dangerously at altitude. Videos will help pass the time as he awaits the announcement that his balloon inflation has begun and he can move to the capsule.

Minus 0h30: Baumgartner will be strapped into his capsule chair to conduct final instrument checks as directed by Mission Control. Then Capsule Engineer Jon Wells will seal the clear acrylic door. For a several more long minutes of anticipation, Baumgartner will await countdown and, finally, launch.

Are you planning on watching? What are your thoughts? Does this make the high wire walk across Niagara Falls seem like a small feat?

UPDATE #1:  The time has been pushed back 30 minutes to 8:30 AM EDT.  Here is one last video message from Felix before he launches into space!

UPDATE #2 – The jump has been delayed. Weather conditions are still favorable for launch this morning. ATA Aerospace along with meteorologist Don Day released a weather balloon this morning resembling a mini version of Felix’s balloon, which carries a radiosonde into the stratosphere to analyze weather conditions over Roswell, NM. Currently on a weather hold due to winds at 700ft – the top of the giant balloon. Next update expected soon. The launch is expected to resume after 9:30 AM EDT (7:30 AM MDT) 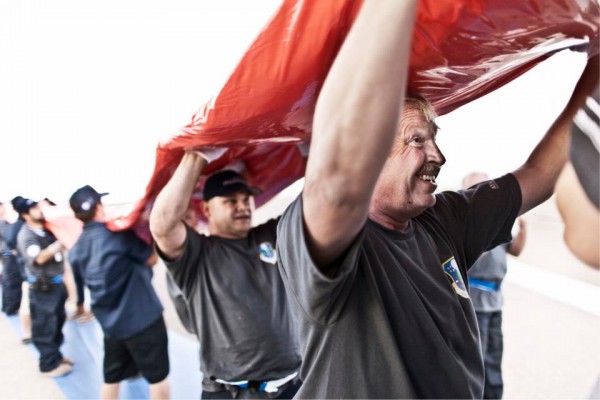 The countdown is back on and the launch should happen at 1:15 EDT. Here is  shot from the Red Bull Stratos Facebook page showing the balloon being rolled out.

UPDATE #5 –  And here we go folks…Felix is now in the capsule and the countdown has begun. Again, to tune in to the event live you can watch direct via Youtube or RedBull. The event will also be broadcast live by Sportsnet exclusively for Canadians on Sportsnet East, Ontario, West and Pacific. We are now looking at just under 4 minutes until launch. Good luck Felix!

UPDATE #6 -This mission has been aborted due to gusty winds. They will attempt this again later this week depending on the weather of course. More news to follow. 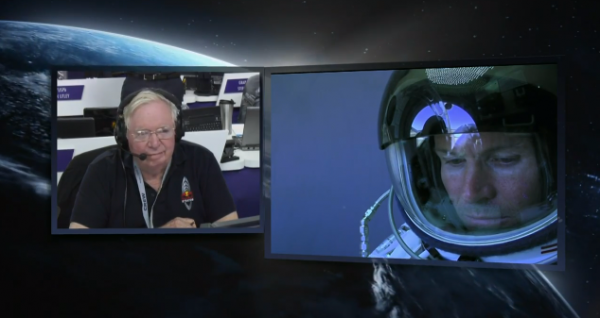 UPDATE #7 – Meteorologist Don Day has confirmed that a Thursday launch will not be possible. The next weather window opens on Sunday October 14th at 8:30 AM EDT (6:30 AM MDT)

UPDATE #8– In about 6 hours, Felix will be attempting the launch again! We wish him luck and will be glued to the live feed.  The Red Bull blog reports that the weather looks promising for a launch tomorrow morning.

“The media is part of our team, you’re part of our family and you have a hell of a responsibility to tell the story to the whole world and we appreciate your contribution that you make to this program.”

Art Thompson:
“We have to go on mandatory crew rest. Our recommendation to get people going is they go out they eat a really big meal with a large dessert, and then they go into a food coma and then wake up in time for the 2300 hour briefing back at the mess hall for updates on weather.”

UPDATE #10 –  Weather hold has been lifted. It is now showtime folks! The balloon inflation has begun. Stay tuned!

UPDATE #12 – Felix has landed safely and what an amazing feat. There was one point Felix was complaining that the visor was “fogging up like hell” and at one point he got into quite a spin but was able to stabilize. The question remains whether or not he broke the speed of sound, and it does appear he did not break Kittinger’s free fall record. Here is a few shots from the event today capturing some of the emotions today. 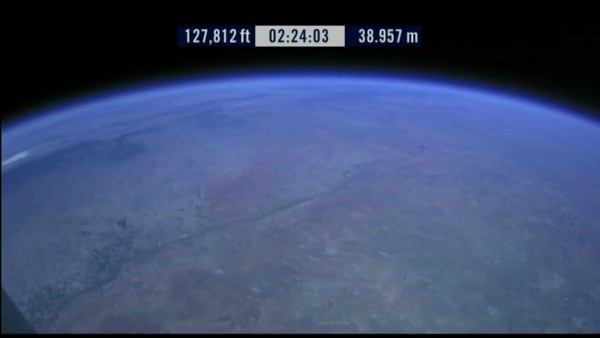 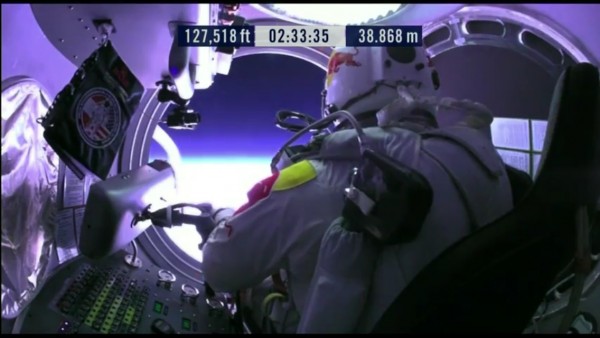 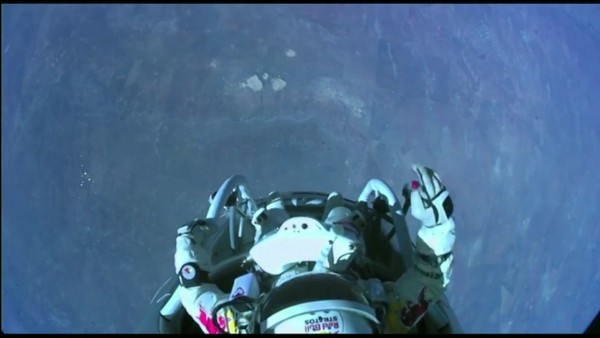 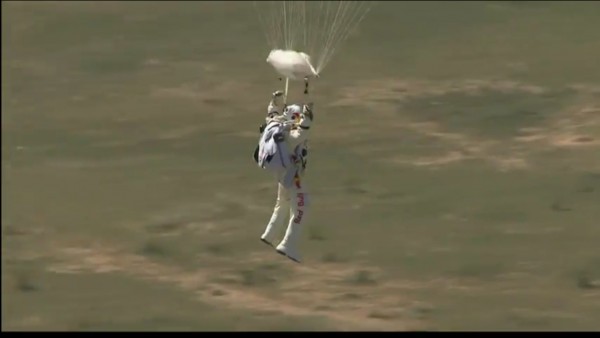 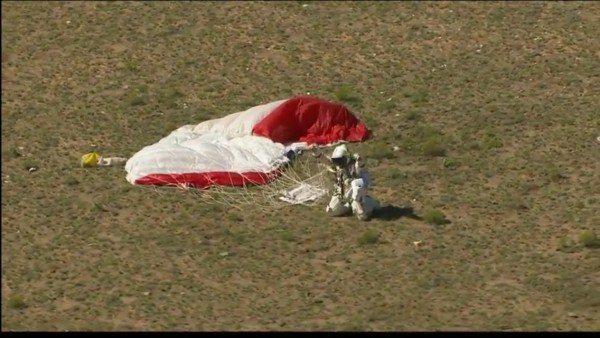 And this last one captures the event perfectly…

Jamie Forestell is the Editor-in-chief and also the founder of Tek Tok Canada. His knowledge and aptitude for Technology led him to create a central website for all Canadians. His strong passion for the Technology world helps him stay abreast of leading-edge technologies and his desire to spread this information was the driving factor behind the creation of Tek Tok Canada.
@tektokca
Previous iPhone 5 Accessory Deals of the Week
Next We Day – The Power of ‘WE’