Earlier today Apple released the 2011 lineup of the iMac. There have been quite a few major changes from last years model. I picked up the 21.5″ i5 2.5Ghz model which retails for $1199. One of the things I most like about Apple products, is the simplicity and user friendly operating system.

Once the iMac is unboxed, the only thing required is to plug it into a power source and you are off to the races.  You are first greeted with a friendly graphic indicating the mac is looking for a user input device. (Mouse/Trackpad) This is one thing that I did not like. Picking up the iMac at your local Apple store, you are forced into the magic mouse. The trackpad is an option but only if you order online. So if you were planning on the trackpad, tack on an extra $69.

Next you are greeted with a graphic to turn the wireless keyboard on and a language/Country selection screen is also displayed. Setup continues for a few minutes, and then the iMac is ready to go. 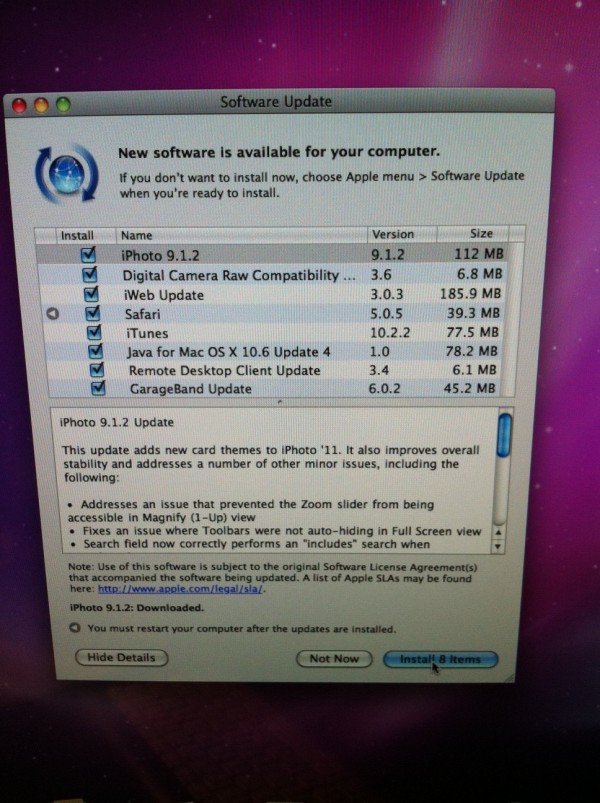 There may be several updates to install but none are required, except for one.

If you want Adobe Flash, you need to install this manually since Apple removed this from the OS X build. This to me is very childish and hopefully Apple and Adobe can quit playing games, and realize the impact their tantrums have on the world. Installing Flash 10.2 is not a big deal, it is just an extra step.

Keeping in mind this iMac is the entry model, the performance has been great. Even gaming was great. Anti-Aliasing was set to 2X which is a bit lower then usual, but other then that all other settings were at their max rates. Running a simple xBench showed a score of 261. This does seem a bit low but once I removed the hard drive from the equation, I received a 373. 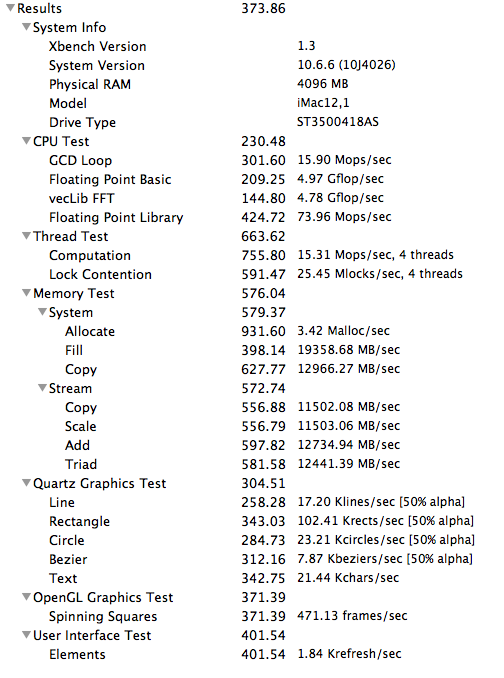 The default 500GB hard drive, although at 7200 seems to be bringing the score down quite a bit. Later we will be reviewing the i7 Quad Core 27″ iMac to show a comparison between the different models.  If you plan on purchasing a mac for internet browsing, email, and gaming, the performance is more then enough, even with the i5 version. The Sandy Bridge processor is a definite improvement.

The iMac also now has a SD slot just under the superdrive CD/DVD slot for those that are looking to upload photos/video without the hassle of a card reader. Myself, this will not likely be used as the cameras I shoot with are all Compact Flash, but for the average consumer the SD slot will be a great feature. Once again, another refresh goes by and still no Blu-Ray support from the optical CD/DVD device.

Also the iMac comes equipped with 4 USB 2.0 ports, Audio in, Audio out, Thunderbolt/Mini Display, Gigabit Ethernet, and Firewire 800. Anything missing? Not really. With the 27″ verions, 2 Thunderbolt ports are included. Now at the time of this article there are no Thunderbolt ready peripherals ready, but we are seeking review units for any Thunderbolt devices in the near future.

Apple is often criticized for higher then usual prices when comparing similar specs on a PC. While the price may seem higher, you need to factor everything in. You are getting a 21.5″ display that has all of the goodness packed into the screen. Quad Core CPU, fast ATI graphics, 4 GB of RAM, and also ships with wireless keyboard, and a wireless mouse. Oh ya, and it ships with Mac OS X also. At $1199, this iMac is priced very competively and I am very impressed with the performance of even the lower end model. 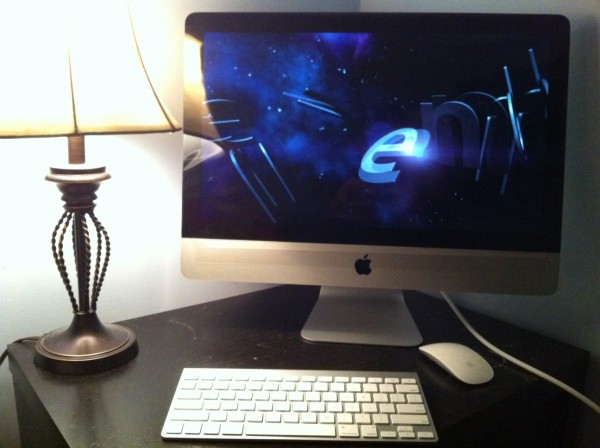 Thanks goes out to David at the Fairview Mall Apple Store for a pleasant transaction.

Jamie Forestell is the Editor-in-chief and also the founder of Tek Tok Canada. His knowledge and aptitude for Technology led him to create a central website for all Canadians. His strong passion for the Technology world helps him stay abreast of leading-edge technologies and his desire to spread this information was the driving factor behind the creation of Tek Tok Canada.
@tektokca
Previous Apple store is down. Apple to refresh iMac lineup today?
Next Blackberry Playbook Video Chat Quick Review