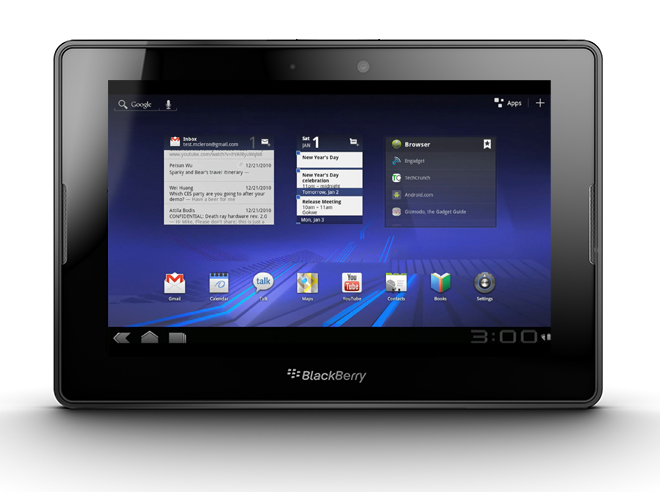 BGR is reporting that good sources have revealed the launch date for the much anticipated Blackberry Playbook tablet. April 10 looks to be the launch date and the tablet will ship without the GM OS(gold master). Users will be prompted to download and install the latest version upon booting up the device.

Now, in the past Apple has been pegged with thread stealing, but is this a well planned leak for RIM to announce the availability of their tablet, and attempt to steal the thunder away from Apple? You bet it is! And it worked didn’t it?

Apple is just hours away from revealing their next generation iPad and only time can tell what this battle of tablets will look like in 2011.  We are very excited for 2011 – Year of the Tablet.  Will Apple bring enough to the iPad 2 to compete? Will the RIM Playbook have enough applications to compete with iOS/Android? (or join forces with Android) Will the HTC Flyer fly away with their magic pen, or will the Motorola Xoom over-power them all? And let’s not forget about the Samsung Galaxy Tab 2  (or maybe we can just veto the Galaxy Tab 1 and refer to the new device as the first Galaxy Tab)

In the words of a completely sane and sober, and do not forget passionate Charlie Sheen, Bring it!

Jamie Forestell is the Editor-in-chief and also the founder of Tek Tok Canada. His knowledge and aptitude for Technology led him to create a central website for all Canadians. His strong passion for the Technology world helps him stay abreast of leading-edge technologies and his desire to spread this information was the driving factor behind the creation of Tek Tok Canada.
@tektokca
Previous Saab announces IQon: Android Infotainment System
Next Happy iPad 2 Day. Or is it?