Early May 3rd shortly after 1:00 am Eastern time I received the latest update for my Playbook. Like before the update is 289 MB in size and installed over-the-air. (are you hearing that Apple? Over-the-air update!). What did this update bring? Read on for details. 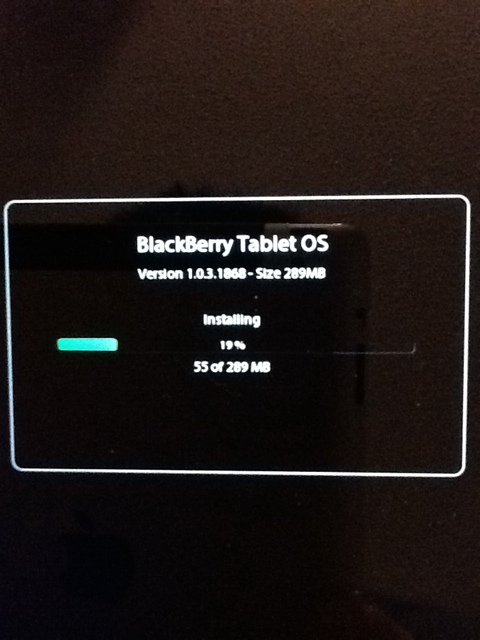 Immediately, the first thing I noticed is the availability of a new app “Video Chat”. While testing this new app is just something I could not do at this time (1:50 am). it’s nice to see it’s there, and I can’t wait to test it when normal people are actually awake. 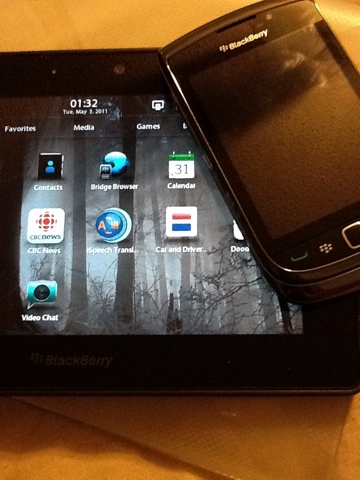 One thing I noticed though is that the video chat application will only work when connected to a WiFi network. When connected via Bridge, you will encounter a message saying :”Network Disabled: The network is disabled or not connected. Please check to ensure your network is connected and properly configured.” All while the blue ‘bluetooth’ light is blinking on my Torch indicating a Bridge connection to my Playbook. 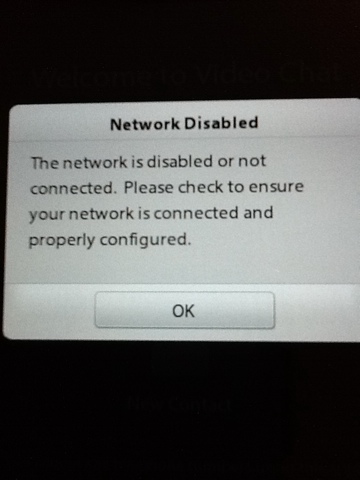 The Bridge Files app seem to have also received a facelift as well as an additional option to browse the Playbook’s storage. This is sorted by Pictures, Video, Music, and Documents. Switching view to the Blackberry smartphone’s storage unit brings you back to the usual file explorer-type window. While this is a nice change, I still am unable to view my stored pictures, music, and documents, and perhaps videos too. Unfortunately I don’t have any stored video on my Torch at this time. 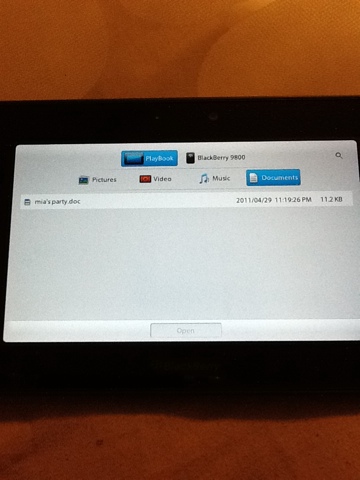 Also included is the easier ability to add bookmarks and access them when bridged. One click and you’ve either added a bookmark to your Bridge Browser or you’ve just launched it.

I was also able to edit documents via Bridge connection. Another rumored addition to this update. I never really noticed or tried this prior to the update, and to be honest, I’m pretty certain I was able to do so before.

So what’s missing? Well, the apparent ability to access BBM on the Playbook is. I tried installing the app from AppWorld, but it’s not there as an option to install. Wherever it is, RIM has so answers for us hopefully later today. Also, immediately after the update, you’ll notice that the Facebook app is missing. This is because the Facebook application was actually revamped. The new version will need to be reinstalled via the AppWorld.

Did I miss anything? Feel free to comment as this article will be updated as we see new changes and additions with this latest Blackberry Playbook update.

UPDATE:  From the tip I received below, I now have BBM installed on my Playbook.  After installation, I did need to reboot the Playbook a few times as it kept closing down when I attempted to launch the app.  Afterwards it is running flawlessly.  Thanks for the tip!

Former Founder of Mobile blog site MGauge.ca is the Managing Editor for TekTok.ca A smartphone fanatic which started with the iPhone 3G to multiple Blackberry and Android Devices. Willingly sacrificed an arm (and possibly a leg) in order to save his iPad 2.
@@Cue_32
Previous White iPhone 4 : What’s the BIG deal?
Next Apple store is down. Apple to refresh iMac lineup today?