What can I really say about the ‘White’ iPhone 4 that I haven’t already said about the ‘Black’ iPhone 4?
For starters, it does look VERY nice and in my opinion, nicer than the black version.

If the aluminum antenna looked good on the Black casing before, the same aluminum antenna looks so much nicer in White. From my testing of the infamous “antenna-gate”, it looks like the connection does not degregate as much as it did with the black iPhone 4.  Keep in mind that this issue apparently is more noticeable when in an area with low network connectivity.  That’s not so much the case when you’re in the Greater Toronto Area.

There really is no sense in me talking about specs comparison since they are identical.  No changes between the two device, at least from what Apple released to the public. So WHAT IS THE BIG DEAL?  Well, the word BIG has relevance when it comes to talking about the white version.  While it is exact same size and dimension to the naked eye, the white one is noticeably thicker than the black.  In the image below, courtesy of Engadget via Pocket-lint.com, you can definitely see the 0.02mm difference. 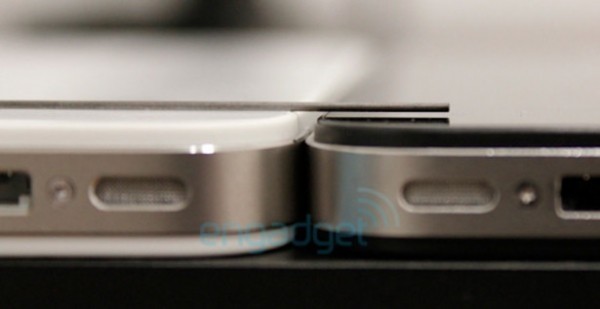 This slight size difference caused concerns with case makers and even complaints that some cases already being used by the public on their black iPhone 4s wont fit with their newly purchased white iPhones. Personally the case that I bought for my wife is a silicone case which is flexible enough that it had no problem fitting the white iPhone. I believe this issue is more towards the pre-formed hard shell cases. 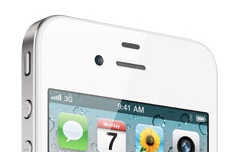 My theory is that if Apple made changes to the way the antenna functions, they will not make mention of it.  If they did, it would spark some complaints from current black iPhone 4 owners and demand replacements on all of them.  A recall that Apple, or any company for that matter, just cannot afford considering it sold at least 1.7 Million in the first 3 days of availability.

On the bright side, if they did improve something, it will certainly be included in the next-generation iPhone 5 rumoured to be released this coming September.  Dual-core, bigger screen with retina display sounds very nice.

When it does come, I’m sure to head over to Toronto’s Eaton Centre Apple Store on release day.  The service I received from Natasha was just amazing. I put her service to the test with my complicated hardware upgrade challenges, and her having to have to deal with a bad customer service rep with my provider.  What did I get in return? A nice chat and a smile to come along with my white iPhone 4. A typical service I have come to expect from all Apple employees nowadays.  Thanks Natasha!

Former Founder of Mobile blog site MGauge.ca is the Managing Editor for TekTok.ca A smartphone fanatic which started with the iPhone 3G to multiple Blackberry and Android Devices. Willingly sacrificed an arm (and possibly a leg) in order to save his iPad 2.
Previous Research in Motion (RIM) kicks off Blackberry World 2011
Next Blackberry Playbook Update: version 1.0.3.1868