Getting around the MotoActv screens is much like your smarphone pages, by swiping right or left.  The home page is the watchface, to the left are the “Workout” page and “Settings” page respectively.  Swipe to the right and you’ll find the “Music” and the “Notifications” page for your smartphone notifications.

To use the MotoActv, you do not need to have the device synced to a smartphone to take advantage of some of its functionality.  However if you take full advantage of its many features, you will need to download the MotoActv app found in the Google Play store. With that said, using it with a smartphone outside of the Android ecosystem, the device will begin to show its limits.  I first started using it while synced with my iPhone5. Sync was done much like any other bluetooth pairing, enable bluetooth and your phone and wait for them to find each other. While it does connect to the iPhone via Bluetooth easily, it does not receive notifications for text messages at all.  For incoming calls however, unless you have a headphone connected directly to the headphone jack you will not have a stable connection to the iPhone.  At the initial sync, it displays that it is connected however it quickly gets drops.  I’m not sure what is causing this to fail but it appears to work even for a short time. Needless to say I did not bother with synching the MotoActv to the iPhone, having a cable running from my wrist watch to my ears was not very comfortable while at the gym.

At last, I got my HTC One and one of the first apps I installed was Motorola MotoActv app from the Google Play store. Synchronizing it was just as easy on the iPhone, if not easier as the set up process for an Android phone was slightly different.  The initial prompt for Smarphone synchronization asks you if the device is running Android 2.1 or higher, hit “Yes” and from there everything else is done on the Android phone via the MotoActv app. Once they are connected, your “Notifications” page will show you notifications from ‘Recent’ , ‘Messages’, ‘Calls’, and ‘Reminders’ for your synchronized calendar. 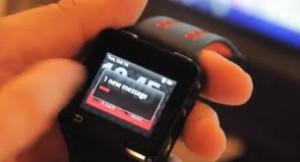 Notification came in flawlessly from my HTC One.  Either by sound or a quick vibrate on the wrist tells you that you just received something on your smartphone.  From my tests, I was able to receive notifications for my incoming calls, reminders and text messages.  No email notifications are received from either iPhone 5 or my HTC One.  Having an earphone plugged in allowed me to accept my phone calls directly from the MotoActv for both iPhone 5 and HTC One.  However, without the headphone, I was only able to ‘silence’ the call when using my Android device.  As previously mentioned, connectivity is not available on the iPhone without a headphone jack connected.  It also conveniently displays the contact name for both messages and phone calls. For incoming text messages I was able to read the message directly from the MotoActv, however responding to them is still done on the phone itself.

For tracking purposes, it the GPS functionality only works when synchronized to a smartphone with GPS capability.  It uses your smartphone’s GPS feature to track your location, your path, and the estimated number of steps therefore the amount of calories burned during your walk\run.  There’s also an option built in so that if gives you an estimation on the number of steps taken when walking indoors, like say a threadmill. Because it is not using distance through GPS, its built in pedometer is used to determine the number of steps taken. This however requires calibrating the pedometer once at every indoor walk for better accuracy.  An extra step in the setting prior to your walk shouldn’t hurt though for the sake of more accurate rates. The ‘Workout’ feature consists of many types of exercises such as walking, running, cycling, Golf, elipitical, and even step machines. There is also a long list of ‘custom activity’ available to you which lists most of any sporting activity you may be involved in.

But perhaps my most favourite feature of the MotoActv watch is the ‘Music’ section.  This is where the MotoActv begins to act like the iPod nano watch.  The music is not derived from your playlist on your smartphone and channels it to your listening pleasure through the MotoActv.  Instead, it has its own built in storage for your mp3 music. Our unit came with its own 8GB of storage space which is sufficient for my listening pleasures.  If you need more than 8GB, a 16GB version is available for you.  The volume buttons are conveniently located as dedicated buttons on the device as well as the music button acts as the play\pause switch.  To change songs however, you will need to do this within the ‘Music’ page.  I attempted to change the music using an iPhone earpod or my Monster Vektr and the double-click feature did not do anything, nor did it stop the music for the single-click. If you however have controls on your bluetooth headphone like I do on my Motorola Rokr HD, it works just fine.  All functionalities are available, I’m just not sure how well it would work since this is afterall a Motorola device connecting to another Motorola device.

In conclusion, do I like using the MotoActv? The answer is Yes.  In fact I can’t see myself without this when I’m at the gym anymore.  I no longer have to worry about my phone dropping on the floor and accidentally dropping the dumbell on it for an inadvertent test of build quality. It is useful for gym-rats or runners alike. Yes it screams out tech-geek at the gym, but its no different than having a smartphone strapped around your arm using an armband. And I get the last laugh when their phone falls out of their pockets and gets lost.

So is it a Smart Watch or a Runner’s Watch?
At the end of the day its all up to the person who wears it.  But for me, I define a “Smart watch” to be something like this.

A watch is something that I can wear casually with my plain clothes, and easily distinguished as a watch when you first glance at it.

For it to be considered smart,  having connectivity to your smartphone including notifications is the very least in my opinion. I understand compatibility across all platforms may not always be possible, but is should at least work with at least 2 major mobile ecosystems. So with that in mind…YES this is a smart device…. for runners. 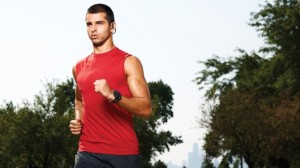 Will I wear this as my daily driver as a time piece?

Not without feeling awkward and geeky…

In addition to this, there is an assortment of benefits that come with practice research affordable-papers.net writing services also.

Former Founder of Mobile blog site MGauge.ca is the Managing Editor for TekTok.ca A smartphone fanatic which started with the iPhone 3G to multiple Blackberry and Android Devices. Willingly sacrificed an arm (and possibly a leg) in order to save his iPad 2.
Previous Next Gen Xbox to be Revealed on May 21
Next TekTok will be “Live” in Orlando at the BlackBerry Live Event