Several readers and staffers have noticed they are unable to connect to WiFi after updating their devices to the latest iOS 6.0 today. This appears to be affecting devices including the iPod, iPad, and iPhone.

It seems this issue just started as most were able to access WiFi earlier in the day but when attempting to connect to a wifi hotspot, a popup opens to the http://www.apple.com url with an error “the page you’re looking for can’t be found.”

It appears we are not alone in experiencing this issue as a thread has been opened on the apple.com support community with many users resporting the similar experiences with some unable to resolve the issue. 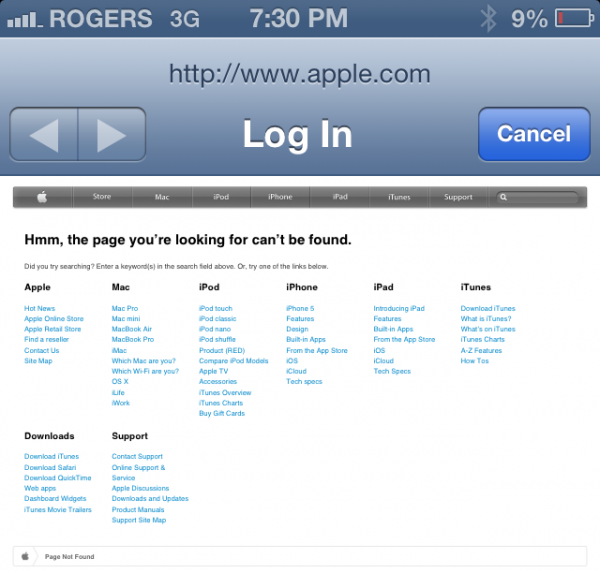 Some methods to resolve the issue are:

I have confirmed resetting network settings has resolved the issue for two of us, so perhaps you may wish to try that first. We have reached out to Apple for comment and have yet to hear a response.

Thanks Frank for the tip!

UPDATE:  It appears Apple has resolved the issue by updating their url to remove the 404 error. Users should now be able to connect to wifi hotspots without applying any of the above fixes. Bizarre!

Jamie Forestell is the Editor-in-chief and also the founder of Tek Tok Canada. His knowledge and aptitude for Technology led him to create a central website for all Canadians. His strong passion for the Technology world helps him stay abreast of leading-edge technologies and his desire to spread this information was the driving factor behind the creation of Tek Tok Canada.
@tektokca
Previous Lexar announces new 256GB SDXC Memory Card
Next iPhone 5 Accessory Deals of the Week