Vimeo has released an HTML 5 Version for Mobile Devices 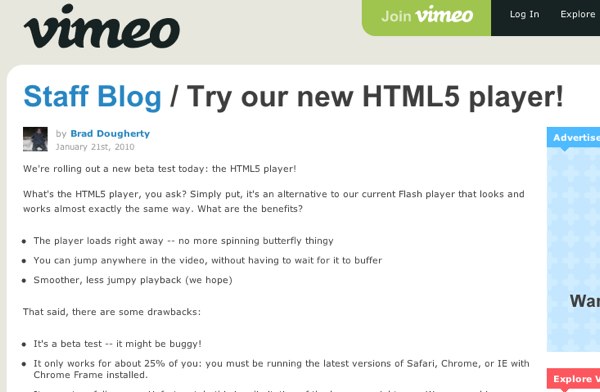 Today Vimeo has announced changes to its website allowing such mobile devices as the iPad and iPhone user’s access to its SD and HD content.  See Below for an excerpt from the Vimeo Blog.

Q: How do I use the new Universal Player?
A: Starting today it is the new default embed code and is available via the embed button on any Vimeo video. Just copy and paste like any other embed code. This new embed code is available for any video, new or old.

Q: What about all the old embed code out there? Do I have to manually replace it with the new Universal Player embed code?
A: Yes, however we’ve build something to help. We’ve written a small Javascript snippet that you can add to your site to that will automatically upgrade old embed code. You can learn more in the FAQ. Every time a piece of old embed code is upgraded to new embed code, an angel gets it’s wings!

Q: Will all my videos work on my mobile phone now?
A: Mobile versions of all your videos is still a Plus-only feature. So while now on an iPhone your videos won’t appear as a blue box, it might not be playable unless you are Plus. If you are Plus, here is how you turn on mobile videos.

Q: What took so long?!?!
A: Video players are like a little garden: easier to build in your back yard than the middle of a highway. While it was relatively easy to build an HTML5 player that worked on Vimeo.com, making an experience that could live and work anywhere is actually a big undertaking. For example, we had to write several new video players to replace what used to be just one: behind the scenes there is a new Flash player, new Flash mobile player, new iPad player, new iPhone player, and new HTML5 player. And we expect to add more. It used to be you could rely on Flash to perform the same way everywhere, but now HTML5 and embed code act very differently from browser to browser and device to device. We’ve spent the past few months evaluating different options and testing quite a lot.

Q: What about the Moogaloop API?
A: We’ve written a Javascript library called Froogaloop that allows developers easier access than ever. Flash developers can still use the existing include method.

Q: This is using an iframe, aren’t there sites that don’t let you use iframes?
A: Yes, certain CMSs and social sites don’t allow iframes. Facebook, MySpace and WordPress are the most notable. However we are not discontinuing the old embed code and as long as you use the sharing buttons in the Share box or the auto-share, sharing to these sites will work. If you’re using WordPress, we recommend the Embed Iframe plugin.

But that’s not all! We’re rolling out a second improvement to the player today called Watch Later.

How many times have you come across a video at work or school that looks interesting but you didn’t have time to watch just then? Watch Later to the rescue!

Starting today, every Vimeo video will by default have a new “Watch Later” button right next to the Like button. Think of it like the Netflix Instant Queue: just click it and the video gets sent to a special album for easy access later when you have some free time. We’ll also be adding the Watch Later album to the mobile site soon, perfect for the commute!

(Of course, Vimeo Plus users can turn this button off in their embed settings. We’ve defaulted it to off for all existing videos with customization. This button will not appear unless you want it to.)

Today is also the first step for Vimeo in to a brave new world: your living room. We’ve teamed up with Roku to bring you Vimeo on your HDTV.

Vimeo on Roku is just awesome! Setup and linking your account is easy and you’ll be stunned at the quality, especially if you’re uploading in HD. You can easily access your videos, likes, subscription inbox, and Watch Later queue. We’ve also added the HD Channel, Staff Picks and the ability to play an entire set of videos with one click. It’s truly a unique and affordable way to experience Vimeo from the comfort of your couch. Check out Roku to learn more. If you’re already a Roku user, the Vimeo channel should be in the Roku store later today (it’s free).

That’s all for now. We’ve been working hard to bring you these three new innovations and sincerely hope they make Vimeo a better experience. Remember that most of this is just the first step, expect to see Vimeo support spread far and wide as we steadily improve support for new and exciting platforms.

Jamie Forestell is the Editor-in-chief and also the founder of Tek Tok Canada. His knowledge and aptitude for Technology led him to create a central website for all Canadians. His strong passion for the Technology world helps him stay abreast of leading-edge technologies and his desire to spread this information was the driving factor behind the creation of Tek Tok Canada.
@tektokca
Previous Blackberry Torch 9800 Price Drops to $99
Next Apple Patents a Desktop TouchScreen – TouchScreen iMac

The Best VPN With respect to Mac

The best VPN for Mac is an important program for Mac pc users. Irrespective of …