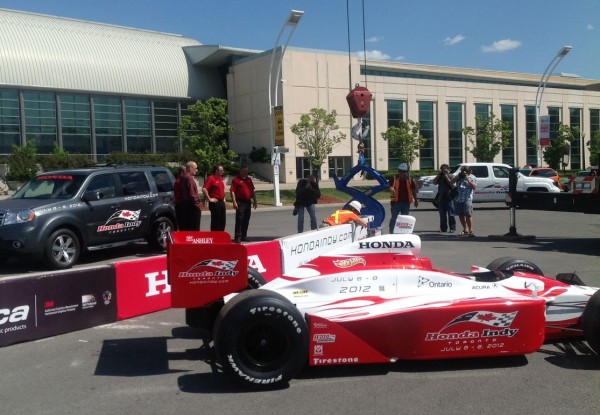 The 2012 Toronto Honda Indy is not until July 8 but efforts are now underway in preparation for the big weekend. The Indy weekend is being held July 6 through July 8 in the Exhibition Place area.

“It takes six weeks to put this track in and the circuit is the same track since 1986, which is a testament to how much the drivers enjoy the track,” Charlie Johnstone, vice-president of the Indy said Wednesday. “Toronto always produces exciting racing because of the combination of speed and areas to pass.”

For anyone commuting downtown from the west, driving through the track is one of the hardest things to do without going over the speed limit. Seeing the tires and banners overhead is such a rush.

For tickets you can purchase via the Indy website.

May 30, 2012 (Toronto) – For more than two decades, Director of Operations for the Honda Indy Toronto, Jim Tario has led the construction of the event’s race track. With this season’s race weekend fast approaching, Tario and his highly-skilled construction team began the conversion of the city’s streets surrounding Exhibition Place into the 2.84 km, 11-turn street course that continues to feature the fastest, most versatile race cars and drivers in the world. Now marking its 26th season, the Honda Indy Toronto’s race track has remained virtually unaltered over time, which serves as a testament to its timeless circuit construction.

The continued contribution of Tario’s expertise has resulted in a race track that yields value in many areas. Not only does the track produce an exciting and challenging race for its professional drivers each year, it also holds merit in its safety and design. “There is a definitely a delicate balance in the work involved with constructing a race track that’s fast, exciting, challenging and, first and foremost, safe,” said Tario. “While the track remains largely unchanged in its 26-year history, we continue to invest in the race track infrastructure to ensure it exceeds all international standards and maintains our status as one of the premier street race circuits in the world.”

“The Honda Indy Toronto has one of the most challenging and exciting layouts among the street courses in North America,” said Roger Peart, president of FIA Circuits Commission and ASN Canada FIA. “The build is a complex process and it’s amazing what Tario and the team are able to construct over such a short period of time. Organizers of the event in recent years have invested in new track infrastructure, making the racing experience at Toronto not only thrilling, but safe for everyone involved.” Peart is responsible for overseeing all internationally licensed racing circuits around the world and, like Tario, has been inspecting the Honda Indy Toronto race track since its inception.

The Honda Indy Toronto race track is built by approximately 200 construction workers, takes 39 days to build, and 21 days to tear down and remove all traces of the race. It is comprised of over 2,000 steel-reinforced concrete barriers each measuring 12 feet long and three feet high. The total length of the blocks span over 12,000 feet and are each made using approximately 8,650 pounds of concrete. More than 1,200 sheets of fencing surround the track with each fence standing at eight feet high and 12 feet long. The track also features over 1,600 feet of tire wall, each one standing at five tires high and four race car paddocks.

About Honda Indy Toronto
The Honda Indy Toronto takes place July 6-8, 2012 on the streets surrounding Exhibition Place near Lake Ontario and downtown Toronto. With 26 years of IndyCar racing history in Toronto, the Honda Indy Toronto is among the most respected motorsports events in North America and includes the fastest racing series on the planet, celebrity athletes, and a festival of live entertainment and interactive activities.

Jamie Forestell is the Editor-in-chief and also the founder of Tek Tok Canada. His knowledge and aptitude for Technology led him to create a central website for all Canadians. His strong passion for the Technology world helps keep him to stay abreast of leading-edge technologies and his desire to spread this information was the driving factor behind the creation of Tek Tok Canada.
@tektokca
Previous Nest Learning Thermostat begins shipping to Canada
Next GM set to close Impala and Equinox Plant in Oshawa

One of our favourite former Dragons and now Sharks on the hit series “Shark Tank”, Robert …