TekTok’s Mobile “State of the Industry” 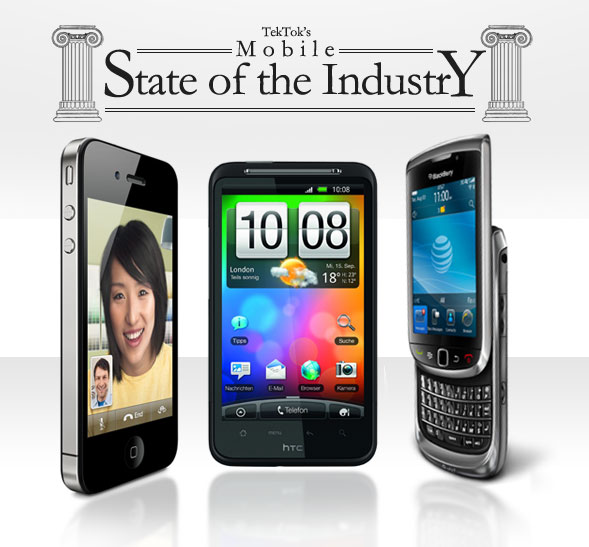 Time to check in on the current state of the “Smartphone Wars”. The battle for the hearts and minds of smartphone users rages on, and as we enter Q2 2011, statistics will start to be released outlining where we are post-2010, where we saw Google’s Android platform make huge leaps forward, Apple launched the incredibly successful iPhone 4, and RIM lost significant marketshare to its competitors. As new stats come out, we will do our best to analyze and discuss what’s happening in the industry, why it’s happening, and most importantly, how does it benefit you the smartphone user. ComScore, an established market research firm has released its US smartphone penetration findings and the results are quite telling. 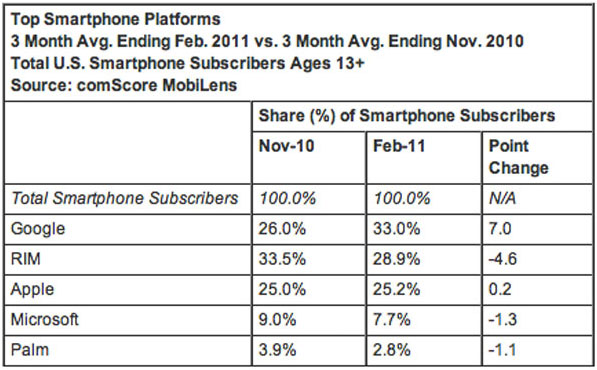 The results show gains for both Android and iOS and fairly significant losses for RIM from Nov 2010 to end of Feb 2011. Android gained a huge 7% chunk of the market placing them squarely in the #1 slot south of the border, while RIM lost 4.6% overall. Apple iOS had only a slight gain of 0.2%. It will be interesting to see what data comes out of the next 3 months, as cheaper iPhone 3GS handsets enter the market. Another interesting bit of info from the ComScore study is Windows Phone 7’s drop from 9% marketshare down to 7.7%… not a good sign for Microsoft’s re-entry into the industry, especially considering the $500 million dollar WP7 marketing budget Microsoft forked over to inform the public about their new phones. Lastly Palm lost 1.1% for a total of 2.8% marketshare… which is no surprise since Palm was swallowed up by HP and no new WebOS phones have entered the market since the acquisition.

So what grandiose fanboy claims can be made based on this data? Is this proof of the “Android” takeover most analysts are predicting for 2011? Will the iPhone 5 come out in another 3 months and blow these numbers out of the water? Will RIM drop a “game changer” device and turn their marketshare and stock price nose dive around? Well if you want my prediction, here it is: HP will release the next gen of Pre phones and use the Albino chick from their old TV commercials to drive fear into the hearts of everyone who doubts how sweet WebOS is, and their sales will skyrocket as a result.

Hey, someone has to root for the underdog.