What is it about zombie movies and games that make them so appealing these days?

For me, I like the lawlessness of it all. It’s all about survival, and blowing things up carte blanche.

But before movies like Zombieland and popular tv shows like The Walking Dead, one game studio saw the writing on the wall. Back in 2006 Capcom released the first of many in the Series (to follow), with Dead Rising.

I’m not sure what drew me to the first of the series except for the fact that the idea of an open world (shopping mall to be exact) filled with mindless zombies and shops to loot sounded like fun.  Now for those who don’t know, I’m what you consider a 5 minute gamer. I can’t do long games, perhaps my A.D.D kicks in and I lose interest quite easily. I also don’t have a lot of time on my hands to play games, so they are in short bursts. For gambling information and upcoming casino events and conferences, click here.

Having said that Dead Rising held my interest from beginning to end, not just once but I believe I completed the game twice. That’s very rare for me!

Fast forward to today.  Having played the follow ons in the series (Dead Rising Case Zero and Dead Rising 2), you could imagine my smile when they announced Dead Rising 3 which is still developed by Capcom, but now published by Microsoft.

DR3 was one of the many launch titles for XBOX One, and for this reason alone, I decided not to wait 6 months to pick up my console…  Believe it or not, my main focus was to setup the XBONE and start DR3 immediately.

One of the main complaints a lot of people had with the original DR, was the lack of online multiplayer.  They addressed this in DR2, and didn’t forget to include it in DR3 either.  So for the next few days, myself and my colleague spent countless hours going through the campaign (all online).  With one word to sum it up, FUN!  How can a million people be wrong?  That’s Capcom’s expectation, having 1.2 million be sold by March 2014 (since its release in November 2013).

As a mechanic Nick Ramos, you explore the open city of Los Perdidos and team up with other survivors to fight your way out of the city before a military strike wipes the city off the map.  As you progress through the story, you start to uncover the truth behind the outbreak.

My biggest complaint about this game are the graphics.  Not what you would expect from a next gen console…  Although the cutscenes are nicely textured (you could see the pores on the faces of each character), the gameplay looks a little dated, cartoony perhaps.  Still, much better than its predecessors (for obvious reasons).

What the game lacks in stunning graphics, makes up for everywhere else.  If you played any of the other DR series you will know how difficult it was to find vehicles, weapons and ammo.

This is not the case with DR3, you can pretty much find a vehicle at every corner ranging from a motorcycle, steamroller (my favourite) all the way to an exotic lamborgini.  For some reason, there were a lot of Jeeps on the street, but were unable to drive them.  A big disappointment for my co-op in crime (a Jeep enthusiast).  There are no shortages of weapons either, you can pretty much find anything on the ground to use whether it’s blunt, sharp or fires at a high rate…

Speaking of co-op, this was probably one of my most favourite features within the game. Call me weird, but I felt more comfortable playing along side someone who could help me out or revive me if I fell victim to the horde of zombies.  With co-op, you can complete the game pretty easily.  It’s not like other games where it get’s more difficult the more people who join (I think Diablo is a perfect example).  We were pretty much an indestructible force when it came to boss fights.  One item I will mention, and it might just be a bug…  We noticed that whoever hosted the online game, had all their items stored safely on their character.  The user who joined the game, did not have their items from the last saved game. i.e. weapons, food…  This happened to whoever was not hosting and was consistent.  Hopefully the massive 13GB patch just released addresses that problem, as it was a real pain in the butt!

Of course we couldn’t have completed the game without the aid of combo weapons and combo vehicles.  If you are patient enough and go through every nook and cranny within the game, you will find blueprints.  These blueprints are for building combo weapons and vehicles.  There is no shortage of blueprints, I believe there are 120 in total…

I buy complete AR-15 rifles as it is my favourite combo weapon to make one fierce turret… Of course if you’re a Star Wars fan, you can always combine a flashlight  and some gems to create a lightsaber…

Some things that made us laugh out loud were the different clothes you could wear.  I think the swimsuit was by far the best worn item in the game (picture Borat’s swimsuit)…  The amount of hats, pants, skirts shoes, glasses made for a wide variety of walking fashion statements! 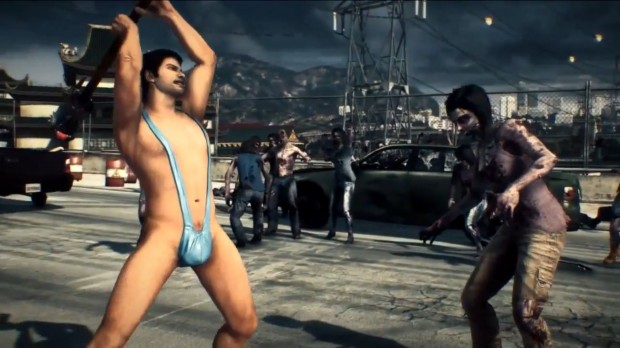 Los Perdidos is an open world, and playing co-op does not take away from your mobility around the city.  In some instances, my partner and I split up doing different side missions and getting credit for it whether you are helping or off doing something else.

This brings me to PP or ‘experience points’ for levelling your character.  It’s pretty simple, the more side missions you do, the more zombies you kill, the more PP you gain.  This of course gives you the option to apply PP to different stats i.e. more health; strength; build skills; ect.

I don’t think there is one thing you can’t do in this game?  Except drive a jeep. 🙂

As a matter of fact, you can take advantage of the Kinect (both motion and voice) and Smartglass App (on your phone).

You can use the Kinect to shrug zombies off your back, instead of smashing buttons, you can also issue commands to survivors you find, such as ‘follow’, ‘scavenge’ or ‘attack’.  Zombies will also respond to noises you make through the Kinect…

DLC content has just been released (Episode 1 out of 4), these can be purchased separately or you can choose to purchase the Season Pass which will give you access to all of the Episodes once they are available.

Overall, DR3 did not disappoint me and was fun to play (especially online).  Aside from losing items when joining a game, I found multiplayer to be quite enjoyable!