All too often we come across sequels that just don’t live up to its predecessors.  Black Flag is not one of those games.  In fact I will state that they have improved on the series immensely, truly giving it an open world feel.  The Vancouver team did not forget the bells and whistles that make their world so immersive and engaging.  You can spend time collecting items, finding treasure, assassinations, petting goats, hire prostitutes (not for what you think, this isn’t GTA) and…did I mention assassinations?

The Assassin’s Creed series is known for its conspiracy mixed with some truth to make a compelling story.  The same rings true here, however our hero in this story is driven by the love of a women that he’s left, to build a better life and return with its rewards.  The story starts with you thrusted right into battle on the open sea’s, when this game mechanic was introduced in AC3 I was a bit annoyed, I was an assassin not the captain of a ship.  However after leaving the first island this quickly became my favorite part of the game and I am ecstatic the developer sailed in this direction.

Upgrading your ship ensures that you kick ass on the open seas, you can either decide to board vessels, clean up the enemy ship’s crew and repair your ship or add it to your fleet for online play.  Once my  man-o-war was shipshape, I didn’t even bother boarding, I’d scuttle them back in to the sea and collect the booty to keep things moving.   The next challenge was conquering the forts spread throughout the map.  During one of my expeditions to expand my empire I was against a heavily armed fort and a hurricane at the same time.  Blimey!!! It was drawn out to the very last screw that held my ship together but victory was mine!!! 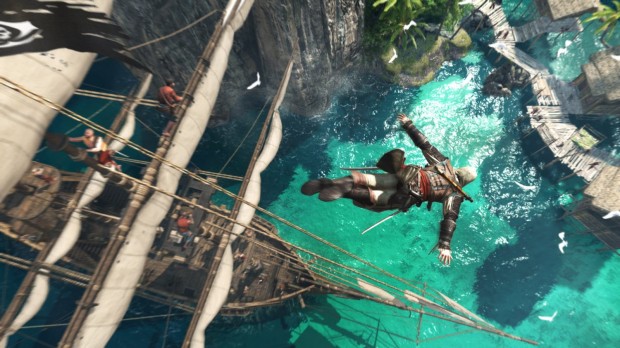 If I were to say anything bad about this game its because I’d be nitpicking…truly.  However I will mention a couple of things that I think could use some improvement.  Being an assassin can mean you use surprise, however I find that because of the number of soldiers around, I found myself in a sword fight many times.  The fighting system is quite easy to learn,  I noticed that I could perform a parry and counter in most situations and thats all it took.  I’m a pirate / would be assassin so I’d think that I’m not as smooth as most would think an assassin to be and the fighting would be a bit harder.  I’ll admit I didn’t win every fight, the challenge became parrying all incoming attacks and breaking their defense which can be tricky in a fight with 5+ British soldiers  and/or Spaniards shooting at you from towers and rooftops.  All of these actions take 1 button to execute and the timing of it really didn’t matter that much.   Refinement of the fighting system could be done to make it a bit more of a challenge.

My biggest annoyance was chasing or tailing in this game, you use the right trigger to run but also climb everything, but at times I found myself climbing when I didn’t want to which made catching the courier or song sheets and staying close to eavesdrop very aggravating.  Does this take away from the game you ask?  Hell no, and if you mention it again you’ll be walking the plank landlubber!!!  Dead men tell no tales!

Wes graduated from International Academy of Design and Technology in Video Game Design and has also been working in IT for 10+ years. He has been a gamer from the days of Atari and the first console he owned was the NES. Wes is a PC gamer to the core and has owned both PS and XBOX and has recently made the jump to Xbox One. As a PC enthusiast, he knows the consoles are always two steps behind when it comes to graphic power and presentation and now with 4K gaming already here these consoles may be a stepping stone in that direction. In his reviews he will look not only at the fun factor but also the various design aspects. His aim is to keep them informative and to the point with a side of humour when appropriate, which is always!
Previous Dead Rising 3 Review
Next Jimmy Fallon Lip Sync Battle with Paul Rudd