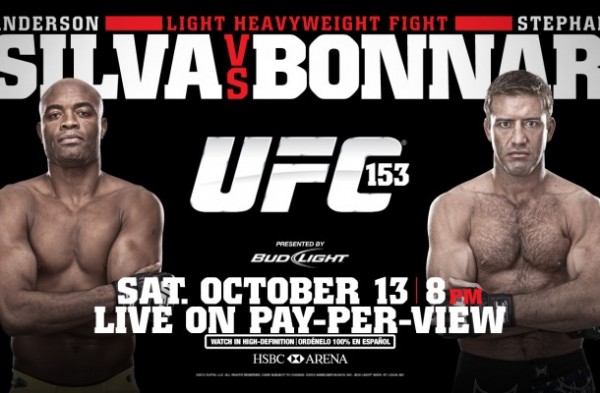 RIO DE JANEIRO – UFC has come back to Brazil for the 4th time with the venue at the HSBC Arena.  It was almost another upsetting card, with Rampage Jackson having to pull out of his fight due to injury, and Jose Aldo pulling out of the main event due to a motorcycle accident which injured his foot.
It was during this tense moment for Dana White, who already went through a cancellation of UFC 151 got a call from Stephan Bonnar and Anderson Silva (wanting to save the event) who would both meet up in the main event at a catch weight of 205 lbs. This main event would not be for Anderson’s belt, who usually fights at 185 lbs.

Each fight was exciting with an amazing display of Standup, Wrestling and Jiu Jitsu. I even found myself amazed with John Fitch’s performance who is usually described as a boring fighter, who grinds out wins.
Antonio Nogueira (34-7-1 MMA, 5-3 UFC) showed us why he is probably one of the best and feared Jiu Jitsu fighter in the game with an armbar win against Dave Herman. Herman who was very vocal prior to the fight and adamant that jiu-jitsu wouldn’t work on him, mouthed the words “fuck me” towards the camera after the loss.

Anderson Silva continues to amaze us with his quick reflexes and an easy win against Stephan Bonnar.

An amazing night of fights for the average mma fan…

Below are the results of UFC 153