Call it Leap-of-faith, or design genius, LG’s idea of relocating the power and volume buttons to the back of the phone is a design risk. A risk they were willing to take perhaps because they knew they were introducing consumers to something they did not yet realize was a better placement for it.  But this is not the only thing that’s new with LG’s latest flagship smartphone.  This year, LG went all out in both hardware and software aspects.

Let’s face it, 3rd place for the great smartphone race is up for grabs.  With Nokia and Blackberry struggling to stay competitive, and HTC in its corporate hardships, LG probably sees itself in 3rd place by default and has been giving Samsung some competition since the Optimus G released last year. Just as the Optimus G was their counterpunch to Samsung’s Galaxy S3, the G2 is no different this year. As a long time Galaxy user, I am very impressed with the G2. First of all, lets look at the specs of the G2.

For the “technology\smartphone geeks” like me, these specs are impressive but also expected. The “smartphone” technology has grown so drastically in the past couple of years that you wonder whether some of these high-number specs are even necessary for a smartphone.  This growth coincides right alongside that with the growth of its base ecosystem which is Android. With their limitless introduction of bigger and better devices and features, albeit some are unnecessary, its become the driving force that powered Android past Apple’s iOS in popularity.

However, for the regular consumer, these specs are nice to see but in reality it’s not the numbers that count, it’s how it performs and handles our daily tasks that we ask of it.

When it comes real-life situations, apparently there are a couple of ways you can go about in trying to capture a consumer’s heart (and pocket). As previously mentioned, you can bombard them with features and hope that the consumer finds most of them useful. Or, you can make it simple with less features, but with the necessities intact. You wont have all the latest and greatest, but “it just works”.

With LG’s G2, they have a little bit of both.  It is a feature-filled device, and even more animations than any Galaxy currently provides, plus the “it just works” feature of a long lasting battery life that you would expect from a 3000mAh.  From the multitude of Android devices and iPhones I’ve owned in the past, the G2 takes the cake.  All my attempts to drain the battery always guaranteed me at least a day and a half of life with heavy use. By “Heavy Use” I mean I literally tried to use the phone for every little thing possible. Pretty amazing considering this is with a Full HD screen at 5.2″. When it comes to smartphone, its nice to have the features, but all of it is for nothing if the battery doesn’t last. I believe that if there was anything that makes the LG G2 stand out of the pack, its that it has a great battery life. 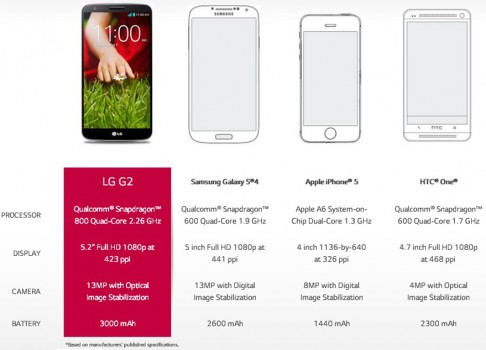 I have had the chance to really test the battery over the last two months and no matter what I do, it is near impossible to drain the battery within the first day. What LG has provided to the Android community is essentially the first true 2 day battery.

I did however mention that it has a little bit of both…LG did bombard you with features that may not necessarily appeal to everyone. While all the camera features are great, I think manufacturers should take some ideas out of the HTC One where you open the camera app, shoot a burst of shots and add the tricks later. The G2, similar to the Galaxy S4, you open that camera app and you have to choose what kind of photo you’re going to take. While some features make sense to activate prior to taking the photo. Like say, you want the front facing camera to include you in the photo. However, I like the idea of having to take burst shots and have the phone recognize the burst of photos and give you the option to convert\merge these photos and turn it into an “Action Mode” shot. Another situation where I noticed that there was too many features on the phone was the amount of ways you can access the multi-task function.  Hold the menu button and you get the typical Android style multi-task mode. You can also do this by swiping the screen with 4 fingers to the left.  This pushes the current app away and puts it into the the LG’s version of Multi-tasking.  I may be nit-picking a little bit but I would’ve preferred that if manufacturers added their flavour to Android, then either have it your way, or the Android way, not both.

The LG G2 features an OIS (Optical Image Stabilizer) camera delivering 13 MP photos and with a 9 point multi focus you can capture some great memories with this device.

httpvh://www.youtube.com/watch?v=k72Wr0k0yD4
On top of all this, what’s great about what LG has done to the G2 is that the Operating System, along with the features they added did not use up too much of your internal storage. I can honestly say that with big surprise to me, it’s LG that finally figured out how to merge Android OS and their skin without affecting the drain on battery life.

Another one of my favourite features is Guest Mode which is truly a requirement in my honest opinion for all phones. If you have ever had to lend your phone to a friend or coworker, or even your children, its a very uncomfortable situation as our phones are becoming such an important part of our lives. With a simple pattern code, you can add a guest mode which is essentially allowing only the applications you approve of and all access to your contacts, phone history, and all private documents are inaccessible in this mode.

Audio Zoom is a feature that zooms into the subject when you are capturing video and it minimizes the background  noise that may be present.

Last month, LG also came through with a promise to deliver the Android OS KitKat update to G2 owners. The update process is fairly seamless and adds even greater life to the battery and includes performance tweaks.

Kudos to LG for a great device, and one that I think will be the new standard.

Former Founder of Mobile blog site MGauge.ca is the Managing Editor for TekTok.ca A smartphone fanatic which started with the iPhone 3G to multiple Blackberry and Android Devices. Willingly sacrificed an arm (and possibly a leg) in order to save his iPad 2.
Previous Lenovo Y410P Pricing Error
Next Lenovo responds to pricing error finally