Many people may know Crytek studios from their FPS series Far Cry and Crysis. Ryse is a new direction for Crytek developers which have lived up to their artistic design with the use of CryEngine.  However the fighting system in Ryse fails to live up to the more complex fighting systems found in God Of War or the Batman Arkham series.Executions are the highlight of the fighting system but completing Executions are too forgiving.  For instance when starting an Execution enemies quickly flash the color of the button you should be using to perform the 2 or 3 step quick time event.  You can press the wrong button and the execution will continue.

Wrong timing and buttons will give you a lesser grade but still offers more than enough Valor(upgrade points) and refill to your buffs.  You can choose which buffs to refill on the fly through the use of the D-pad;  health, focus, damage and XP gained after a successful Execution can be selected.  If you choose a harder difficulty the second time around, you will notice that these amounts decrease immensely.

As you defeat enemies through Executions you gain Valor which you can use to unlock some variables in Execution sequences but the quick time events do not change in timing or button combinations.  This could have been explored more to create a more robust and varied gameplay strategy that offered more reward when executed precisely. 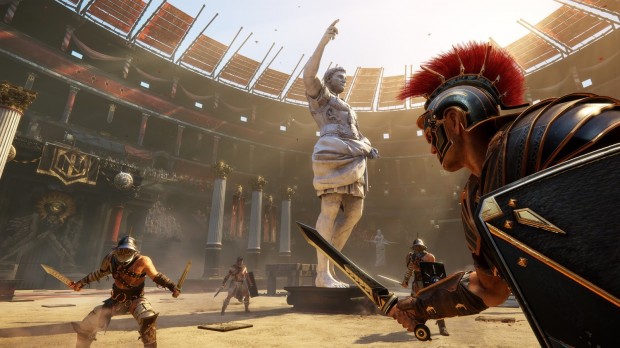 Executions easily build up your Focus mode where time slows down for a period and you can hack away at multiple enemies until you can perform an Execution on them.  Focus combined with Executions(focus does not drain while in Execution mode) makes taking on multiple enemies and bosses incredibly easy, which could be a problem if looking for a challenge.A neat gameplay mechanic introduced is the infamous Roman formation fighting strategy used at times when fighting alongside your AI soldiers.  While approaching a defense with archers you can tell your men to march, change into shield formation(to block incoming arrows) and spear throwing to take out your enemies while they reload.  This mechanic as well as manning the ballista’s become all too familiar and seemed pasted in to change the pace of the fighting system.  The 6-8 hour completion time to get through the single player campaign just barely allowed for boredom to not set in by 80% of the game.

The story in Ryse reveals a corrupted Roman empire, influenced by the gods, with elite leaders that keep their own agenda’s above the honor and integrity that the Roman Centurions believe they fought for.  Unfortunately the connection between the player and characters inside the game fall short.  Anyone would want revenge on those who have taken their family away from them but I think illustrating those connections a bit further before taking them away create for a better dramatic effect.  Overall this game romanticizes the Roman Empire by experiencing it through  a duty bound, revenge filled Centurion and his brutal yet fun execution’s.  However do not forget even though the Roman Empire had its strength and decadences, it was built off of slavery and brutality.

The multiplayer in Ryse allows for you and a friend to fight in the coliseum to take on whatever they can throw at you or you can champion it yourself.  This provides more entertainment and fun, but shortcomings of the fighting system will become more apparent the further you conquer the few stages available in coliseum.In conclusion Ryse is a bold move for Crytek which may have been hindered because of milestones set for Xbox One launch day.   There are elements of the game that could have been developed further to create more complexity and challenge but ultimately just barely enough to get you through the short campaign and multiplayer.  This could also be a ploy that most developers seem to be following in order to get premium membership or season passes for more game content that in my opinion should have been delivered at game release.  With open world calibre games out there that can keep you entertained for hours on end and at the same price point, you may be disappointed in what this title has to offer.

Wes graduated from International Academy of Design and Technology in Video Game Design and has also been working in IT for 10+ years. He has been a gamer from the days of Atari and the first console he owned was the NES. Wes is a PC gamer to the core and has owned both PS and XBOX and has recently made the jump to Xbox One. As a PC enthusiast, he knows the consoles are always two steps behind when it comes to graphic power and presentation and now with 4K gaming already here these consoles may be a stepping stone in that direction. In his reviews he will look not only at the fun factor but also the various design aspects. His aim is to keep them informative and to the point with a side of humour when appropriate, which is always!
Previous Mygica ATV1200 Review
Next Nike Free Run Flyknit 5.0 (Review)