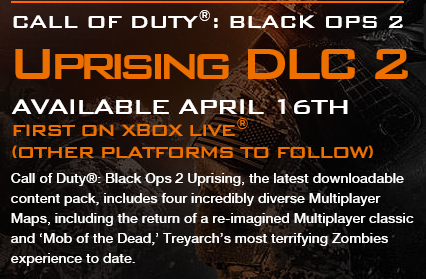 Well the next DLC for Black Ops 2 is finally within sight and will be available on Xbox Live exclusively on April 16.  Uprising is the second DLC pack of the year from Treyarch and Activation and Xbox gamers get it first once again. The download includes four new multiplayer maps and a new Zombie experience called “Mob of the Dead” including  an Alcatraz map with four actors of the most notorious mobsters, Ray Liotta, Chazz Palminteri, Joe Pantoliano, and Michael Madsen.

Rather then read about the exciting new maps, check out the trailer below first! We are hoping to get a DLC code for giveaway so bookmark our post and come back before April 16 for a possible chance to win a redeemable code.

The new multiplayer maps include:

Uprising will be available for purchase on Xbox Live on April 16 and will cost 1200 Microsoft Points, or if you paid for the Season Pass, its included FREE! And PS3/PC gamers, you will be able to download UPRISING approximately a month later so stay tuned!

ACTIVISION AND TREYARCH SET TO DELIVER ONE OF ITS MOST CREATIVE AMBITIOUS DLC OFFERINGS TO DATE WITH CALL OF DUTY®: BLACK OPS II UPRISING – AVAILABLE FIRST, EXCLUSIVELY ON XBOX LIVE ON APRIL 16

A Volcanic Town Overflown with Hot Lava. A Reimagining of Call of Duty®: Black Ops’ “Firing Range” Map. And Zombie Mobsters in Alcatraz. Yep…You Read That Correctly – Uprising’s All-New Zombies Adventure “Mob of the Dead” Brings Together Iconic Hollywood Mobsters and Pits Them Against the Undead in the World’s Most Inescapable Prison

Santa Monica, CA – April 4, 2013 – Call of Duty® fans are set to receive another premium offering of Downloadable Content (DLC) with Call of Duty®: Black Ops II Uprising on April 16. The game’s second, epic DLC pack of the year from award-winning studio Treyarch and Activision Publishing, Inc., a wholly owned subsidiary of Activision Blizzard (Nasdaq: ATVI), will be available first, exclusively on Xbox LIVE® for the Xbox 360® video game and entertainment system from Microsoft beginning on April 16, with other platforms to follow. Call of Duty: Black Ops II Uprising will include four new exotic multiplayer maps, plus an exciting new Zombies experience called “Mob of the Dead” that takes players to Alcatraz with four of the actors behind some of Hollywood’s most iconic mobsters, including Ray Liotta, Chazz Palminteri, Joe Pantoliano, and Michael Madsen.

“With Uprising, the team has really outdone itself again,” said Mark Lamia, Treyarch’s Studio Head. “In addition to creating four amazing new multiplayer maps, the Studio has been hard at work on the Zombies front to surpass what we accomplished with ‘Call of the Dead.’ What they’ve done this time around is nothing Zombies fans have seen before – and if you don’t believe me, just wait until you get into Purgatory.”

Following tradition of the original Call of Duty: Black Ops fan-favorite Zombies mode “Call of the Dead,” Call of Duty: Black Ops II Uprising’s wildly creative new “Mob of the Dead” Zombies experience finds the four prohibition-era mobsters, Billy Handsome (Liotta), Al “The Weasel” Arlington (Pantoliano), Salvatore “Sal” DeLuca (Palmentiri), and Michael “Finn” O’Leary (Madsen) serving time in Alcatraz Prison, only to discover that being behind bars is the least of their problems. With plans to break out of Alcatraz foiled by the rise of the undead, the quartet of inmates will have to lean on their mob-derived skills with firearms, blunt instruments and improvised weaponry as they battle the zombies infesting and overrunning the island. In order to survive, players must work their way through the steel cells and aging concrete buildings while fighting off a multitude of zombified prisoners and guards trapped on the island with them. Additionally, if a player becomes an unfortunate victim, “Mob of the Dead’s” new feature known as “Purgatory” sends players into the afterlife. This new twist on Zombies gameplay is ripe with its own set of objectives, and offers fans a truly new and unique experience.

Uprising also delivers another four new, exotic and diverse multiplayer maps set around the globe for fans to jump into. “Magma” is a modern Japanese village with volcanic eruptions carving multiple paths throughout the town. “Encore” takes place in the aftermath of a deserted London music festival and leaves numerous opportunities for run-and-gun, close quarters combat. “Vertigo” is a futuristic high rise in India housing a high-tech lab featuring dizzying vistas and multi-tiered pathways. Finally, “Studio” is a contemporary remake of “Firing Range,” a fan-favorite multiplayer map from the original Call of Duty®: Black Ops. “Studio” is a Hollywood movie back lot with a variety of cinematic themes that range from Sci-Fi to the Old West.

Call of Duty: Black Ops II is rated “M” (Mature – Blood and Gore, Intense Violence, Strong Language, Suggestive Themes, Use of Drugs – content suitable for persons ages 18 and older) by the ESRB. More information on Call of Duty: Black Ops II can be found at http://www.callofduty.com/blackops2 or on www.facebook.com/codblackops. Fans can also follow @Treyarch on Twitter.

About Treyarch Treyarch is an industry-leading game developer, wholly owned by Activision Publishing, Inc. whose Call of Duty: Black Ops II set world-wide launch day records, and whose previous game Call of Duty: Black Opsset an entertainment launch opening record upon its release in 2010 and continues to be one of the best-selling games of all time, according to NPD and GfK Chart-Track.

Jamie Forestell is the Editor-in-chief and also the founder of Tek Tok Canada. His knowledge and aptitude for Technology led him to create a central website for all Canadians. His strong passion for the Technology world helps him stay abreast of leading-edge technologies and his desire to spread this information was the driving factor behind the creation of Tek Tok Canada.
@tektokca
Previous Gears of War Judgement First Glance
Next Skype for BlackBerry 10 launching April 26