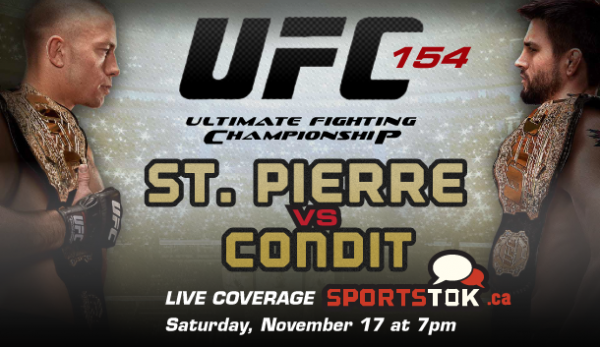 One of the biggest sporting events of the year is happening this weekend in Montreal Canada and there are some great battles lined up in the fight card. UFC 154 showcases the return of GSP taking on Carlos Condit, and some other Canadian Fighters on the card to watch out for include Mark Hominick, Patrick Cote, Sam Stout, Mark Bocek, Nick Ring and Antonio Carvalho. You can catch the weigh ins today at 4PM ET live on ufc.com.

Hominick will face Pablo Garza which has “Fight of the Night” written all over it. This fight will start off the PPV event at 10PM ET so be sure not to miss the first event. Hominick fighting out of Thamesford, Ontario on losing his last three fights:

“I’m realistic,” he said. “I understand my back’s against the wall here and I have to win this fight, and that’s what I’m gonna do. This is a fight where I’ve been given the opportunity to again be on the main card of the Pay-Per-View, and this is an opportunity not a lot of people get, coming off three losses, to be showcased like this. So I’ve got to go there and perform and win.”

“I really didn’t give it that much thought until I started hearing all the interviews, and for sure, that’s one of the first questions,” he laughs. “But I’ve always tried to keep a positive outlook from my last three fights, and yeah, I’ve had three losses, but in one I took one of the best pound-for-pound fighters (Jose Aldo) to his limit, I made a seven second mistake with “The Korean Zombie” (Chan Sung Jung), and the last fight was a split decision (against Eddie Yagin) in which I thought I could have earned the decision. So I look at it like I just gotta get the W and get the ball rolling back where I belong amongst the top in the division.”

Be sure to catch the prelims as well starting at 6:20 PM ET on Facebook and look for Antonio Carvalho to take on Rodrigo Damm. “Pato” Carvalho fighting out of Sault Ste. Marie Ontario, says “I’m definitely going to enjoy every moment that I have in the UFC and do the best that I can, put on the best fights, and leave everything I’ve got out there.”

Visit sportstok.ca for our liveblog starting tomorrow at 7PM ET. Let’s get it on!

Jamie Forestell is the Editor-in-chief and also the founder of Tek Tok Canada. His knowledge and aptitude for Technology led him to create a central website for all Canadians. His strong passion for the Technology world helps him stay abreast of leading-edge technologies and his desire to spread this information was the driving factor behind the creation of Tek Tok Canada.
@tektokca
Previous NBA Game Time for Xbox launches in Canada today on Xbox LIVE
Next Target Canada to Surprise Shoppers in Toronto