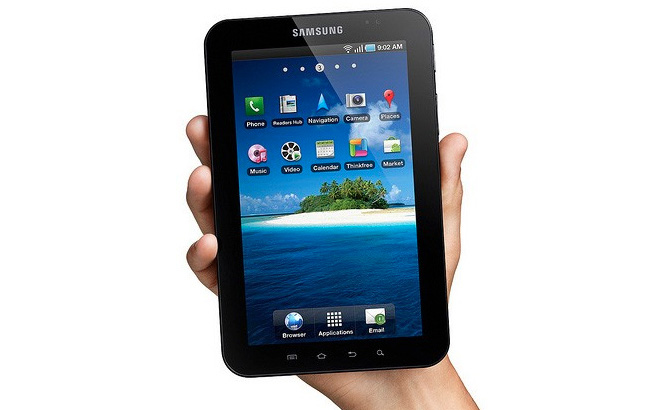 A few weeks back I was given a Samsung Galaxy Tab to review and my thoughts are below.

Resolution: Viewing Applications, music videos, streaming content, even Google in a browser, was terrible on the Galaxy Tab in comparison to the Apple iPad. I can compare this to using iPhone applications on an iPad in 2X mode. It is very apparent that Android 2.2 was meant for a Smartphone, in every way.

Video Playback: Video Playback with .avi and.mkv files was excellent on the Samsung Galaxy Tab. 720P and 1080P HD content played flawlessly and was a great experience. An experience one might never have with an Apple iPad, or even an Apple iPad 2. (unless you have a jailbroken iPad and have XBMC installed in which case the .avi and .mkv also play flawlessly) There is however a major roadblock: FAT32. The android internal and external file system is formatted with FAT32 partitioning. This means any files over 4GB will not copy onto the device. For TV episodes this would not be an issue, but if you plan on watching movies in HD quality, this will not allow 5GB or 8GB files. You would need to split the content in half, or if would like, you can try to copy the file over in KIES mode. Apparently when you are copying the file over, it is transcoding so this could take quite a while to copy over.

Video Conferencing: The first thing I wanted to experience was a Video Chat and since there was no facetime on the Galaxy Tab, I went for the next best thing: Skype for Android. Wrong. Skype for Android does not yet support video chat and only supports audio calls or chats. I found a third party application called Tango, which has great reviews, however both parties require the same software, similar to Apple’s facetime. This was very disappointing since we have front and rear facing cameras. I also noticed that while I was able to take a self shot of myself using the front facing camera on the Galaxy Tab, I was unable to capture front facing video. The video capture only works out of the rear camera.

Mail: Apple recently added universal inbox support for the iPad in which case you can merge all of your mail inboxes together to make checking for new mail a more pleasant experience. I was happy to find a similar mail experience with the Samsung Galaxy Tab using the native mail client……UNTIL I was noticing all the email I was deleting would re-appear in the inbox as new mail several minutes later. After recreating my IMAP mail accounts, ensuring all settings were correct, contacting Samsung, I ended up finding my answer in a number of forums. Samsung Galaxy Tab native Mail application does not allow emails to be deleted as this appears to be a bug…The Gmail mail client works well so for anyone that doesn’t use hotmail or other email accounts, they may not notice this issue, however this is huge! I was able to install a third party mail application called “K9” and this client was great. There were a lot of great features built in and the delete function worked like a charm. 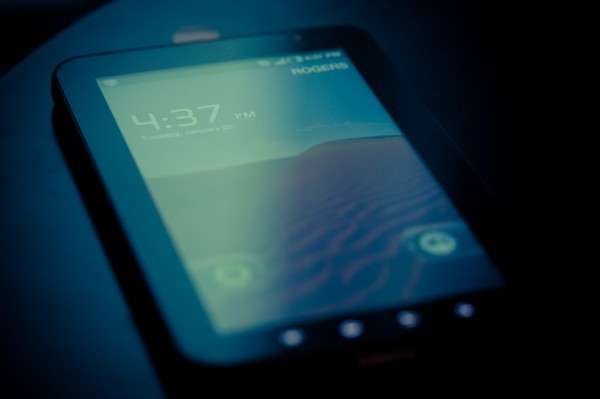 Now for the battle of the devices.

Screen Size & Resolution: Hands down, this goes to iPad. Cannot even comment on this. Ipad already ships with a tablet ready OS. Samsung has unveiled the new 10.1″ Galaxy Tab at Mobile World Congress 2011, and it will ship with Android 3.0 Honeycomb OS, so the resolution will be great to see on the new tablet.

Video Playback: Hands down this goes to the Galaxy Tab. The ability to play multiple codecs is a must have in a tablet device. The Android marketplace and Samsung Movie Hub lacked content in comparison to the Apple iPad, but for the folks that already have their favorite TV shows and movies queued up and ready to watch in .avi or .mkv, this was a no brainer. 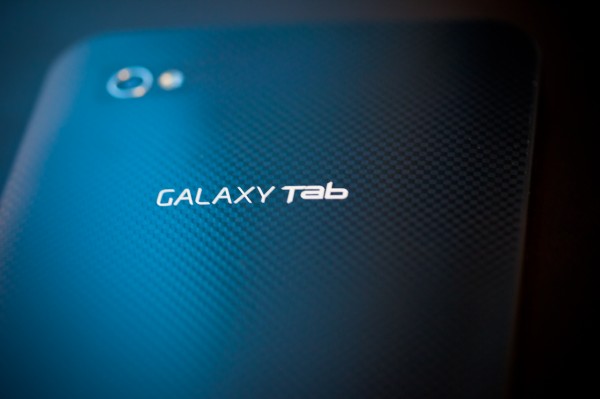 Write Speed: Copying files through USB to the Galaxy Tab would not hit more then 4.5/mb per second which is very slow. If you are trying to copy a 4GB .mkv file (unfortunately unable to copy more then 4GB due to FAT32 partitioning), you could be waiting a while. Even using MicroSD the slowness was apparent. This goes to the iPad.

Camera Quality: Well, the iPad has no camera so Galaxy Tab wins. Despite winning, ability to take self pictures does work with the front facing camera, but unable to do so in Video Mode.

Battery Life: This is a very close call as both devices offer 10 or more hrs of usage time, but the iPad seemed to take the cake here lasting approximately 12 hours.

Buttons: The Galaxy Tab ScreenLock button is in a very awkward place on the bottom, so quite often I would be locking the device accidentally. I found it difficult to enter/exit applications which could also be bad developing, but with 4 buttons, it was a guessing game which one would exit and which would allow me to continue.

3G/HSPA: The iPad maxes out at 3G speeds while the Galaxy Tab is equipped for HSPA (3.5G) speeds. Reception seemed a bit better on the Galaxy Tab.

Browsing: To be fair I tried both the native browser and also Firefox on the Galaxy Tab..but no comparison here. Scrolling/Zooming way too often. I also noticed a 5 second delay when opening the native browser. iPad FTW.

Firmware: The iPad is currently offering updates to the firmware on a regular basis and will be receiving iOS 4.3 shortly. As for the Galaxy Tab, the device ships with Android 2.2 Froyo, and may have the ability of upgrading to Gingerbread 2.3, but not Honeycomb 3.0 according to recent reports. So the Android tablet, which has been out for only a few months in Canada, is already at the end of its cycle so do not lock in for a 3 year contract, or even a 3 month contract?

Applications: The applications that come with the Samsung Galaxy Tab, seem to be weak. I felt I was always looking for the third party application to replace the native applications. The mail client didnt work, the browser was slow loading the initial page, and it just didnt seem to have the wow factor. I contacted Samsung to inquire   The iPad comes equipped with applications that work out of the box. 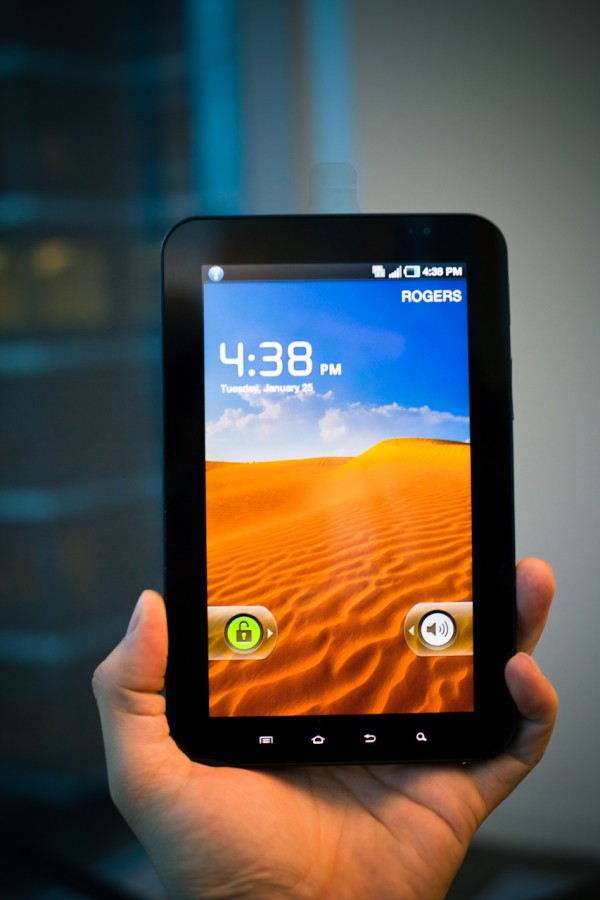 Verdict:I would really encourage anyone to hold off until March or April of 2011 before purchasing a tablet, if you have not picked one up at this point. I have to admire Samsung for actually producing a tablet that is not vaporware, however it lacks a lot of punch, a punch the new 10.1″ Galaxy should have. I think 2011 is going to be a great year for tablet wars.  iPad 2 vs Samsung Galaxy 10.1 vs Motorola Xoom vs HTC Flyer, and all the others contending. For now I will hang on to my iPad (until it sells on craigslist/kijiji), and await for our review units to come piling in. Very excited for the HTC Flyer and Motorola Xoom specifically. Samsung 10.1 looks to be great as well but we have a hard time with their PR folks. Maybe now they will respond?

Jamie Forestell is the Editor-in-chief and also the founder of Tek Tok Canada. His knowledge and aptitude for Technology led him to create a central website for all Canadians. His strong passion for the Technology world helps him stay abreast of leading-edge technologies and his desire to spread this information was the driving factor behind the creation of Tek Tok Canada.
@tektokca
Previous Motorola Xoom to ship with no Flash Support
Next Audi TT RS coming to Canada