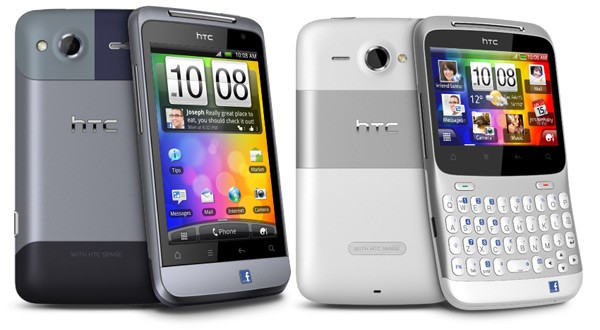 HTC announced 2 new devices to the lineup today, at the Mobile World Congress being held in Barcelona. The pictures of these phones leaked the other day, and everyone suspected Facebook was going to announce these as their own. The social phones feature a facebook button for one-touch access to the social network. The Facebook button is context-aware,  gently pulsing with light whenever there is an opportunity to share content or updates through Facebook. The HTC ChaCha and the HTC Salsa will both feature Android Gingerbread 2.3.3 and have 5MP cameras. Stay tuned for more information.

BARCELONA, SPAIN – Mobile World Congress – February 15, 2011 – HTC Corporation, a global designer of smartphones, today announced two new phones built entirely to be social, combining the simplicity, ease-of-use and depth of HTC SenseTM with the power and connectivity of Facebook®.  As part of an extended portfolio of six new HTC Sense-based devices being unveiled at Mobile World Congress, HTC ChaCha and HTC Salsa feature a dedicated Facebook® button for one-touch access to the key functions of the Facebook service that are integrated throughout the HTC Sense experience.

“We have worked closely with HTC for several years on bringing Facebook to their devices and HTC ChaCha and HTC Salsa are the next stage,” said Henri Moissinac, Head of Mobile Business for Facebook. “HTC has brought Facebook to these two new devices in an innovative way enabling people to connect and share easily whenever they want, wherever they are.”

The Facebook button on HTC ChaCha and HTC Salsa is context-aware, gently pulsing with light whenever there is an opportunity to share content or updates through Facebook. With a single press of the button, you can update your status, upload a photo, share a Website, post what song you are listening to, ‘check in’ to a location and more. For example, you can take a photograph of friends on your phone and upload it instantly to Facebook by simply pressing the button. Or let your friends know what song you’re listening to by pressing the button while listening to music on the phone. The track is automatically identified and shared on Facebook.

The new devices feature Android Gingerbread 2.3.3, the latest version, and use the latest iteration of HTC Sense to integrate Facebook throughout the HTC Sense experience. When you make a phone call, the dialer screen displays your friend’s latest status and photos, and even tells you if their birthday is approaching. The same updates are also displayed when you receive a call from a Facebook friend. You can also use your phone’s existing contacts to help you connect with them on Facebook or personalize your handset further with a number of new, Facebook-branded widgets.

The HTC ChaCha and HTC Salsa smartphones make it simple to stay in touch with your friends using Facebook Chat and Messages on your phone. Your Facebook messages and conversations are integrated within your phone and appear within your text and email inboxes alongside your regular conversations.

Stay connected with the smartphone for the Facebook generation – HTC ChaCha
The HTC ChaCha smartphone is designed to provide a seamless, social experience by enabling you to stay in touch with your friends anytime, anywhere. The unique tilt design shapes the display and physical QWERTY keyboard so it is easy to view and comfortable to type. Capture special moments in crisp, High-Definition detail or video chat with your friends using the dual cameras, including a 5-megapixel color camera with auto focus and LED flash and a VGA front-facing camera. The ChaCha smartphone also brings the Internet to your fingertips with a 2.6-inch, 480 x 320 resolution landscape touch screen.

Your Facebook friends never felt closer – HTC Salsa
Boasting the same deep Facebook integration as the HTC ChaCha smartphone, the HTC Salsa smartphone provides a fast, high-performance smartphone experience. Capture the moment in high-resolution stills or video with the 5-megapixel camera and immediately share it with friends on the generous 3.4-inch, 480 x 320 resolution touch display. Upload your photos to Facebook at the touch of a button. For face-to-face conversations on the move, the VGA forward-facing camera enables high-quality video calling.

Availability
The HTC ChaCha and HTC Salsa smartphones will be available to customers across major European and Asian markets during Q2 2011. In the United States, HTC plans to bring this unique user experience to market later this year exclusively with AT&T.

Jamie Forestell is the Editor-in-chief and also the founder of Tek Tok Canada. His knowledge and aptitude for Technology led him to create a central website for all Canadians. His strong passion for the Technology world helps him stay abreast of leading-edge technologies and his desire to spread this information was the driving factor behind the creation of Tek Tok Canada.
@tektokca
Previous iHome iB969 Charging Station [REVIEW]
Next HTC unveils the HTC Flyer Android Tablet at MWC 2011 [UPDATED]