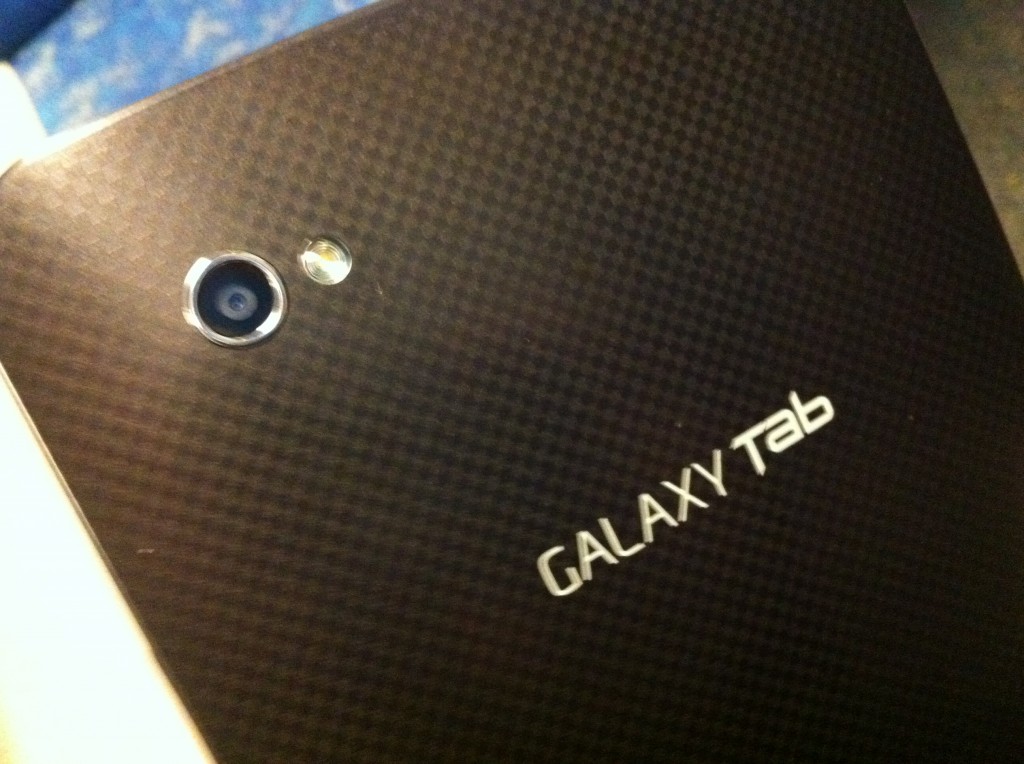 I was able to get my hands on a Samsung Galaxy Tab, and I have been worried for this day to come.  Reading all the specifications, and seeing reviews, I had reason to fear that finally, there was a tablet to compete with the iPad. Some may say that I am bias towards the Apple iPad, and everyone is entitled to their opinions. However I can safely say, I have strong feelings towards the iPad, for good reason! I have yet to hold anything that compares. So let’s see how the Samsung Galaxy Tab measures up.

[easyreview title=”Samsung Galaxy Tab Hands On” cat1title=”Form Factor” cat1detail=”I was surprised at how well the 7 form factor was to hold. Very light and portable. When holding the device in portrait mode is when I missed holding a 10 inch tablet. Button placement is very odd and hard to get used to. Especially if this can be called an ipad killer. It would need to win over ipad users, and the button placement just isnt as practical. The 7 inch screen although nice to hold, will be a negative to this tablet as gaming and movie watching is more enjoyable on a 10 inch screen. If you are going for portability only, then you may wish to give up the bigger size. ” cat1rating=”2.0″ cat2title=”Video Playback” cat2detail=”The device handles media and HD media very well. Smooth playback and handles a variety of formats.” cat2rating=”4.0″ cat3title=”Performance” cat3detail=”Powered by a Cortex A8 1.0GHz processor and 512MB RAM, the performance was very good. There was no lag with the touchscreen or loading applications.” cat3rating=”4.0″ cat4title=”Camera” cat4detail=” Where do I start. Yes, the Samsung Tab has a camera. Is the quality good? Not really. The front facing camera is in a weird spot and it felt very awkward trying to take a self photo. So lets talk about video. Oddly there was no video mode for the front facing camera, only the rear facing which I found odd. None the less, quality=not great, camera placement=not great, my rating=not great.” cat4rating=”1.0″ summary=”Well I was asked yesterday by a coworker, which tablet I could suggest and my opinion truly mattered to him. His needs were video playback of multiple file formats, portability, the ability to plug in usb drives/sd memory, and quality of screen/performance. I could not suggest the iPad to him, as you are very limited to the filetypes for video playback. And I could not suggest this Samsung Galaxy Tab, for the sole reason, It just was not worth the price tag for the end result.  For now I have suggested he look into the Archos 10.1, as I was disappointed with the Samsung Galaxy Tab. So yes, iPad is still my preferred tablet, and in February, can not wait to give the playbook a shot at the title.”                ]

Another quick point worth mentioning,  during my 35 minutes with the device, in the first five minutes I received a system crash.  I had opening the settings app, and was attempting to locate a wifi network, when I received the error below. 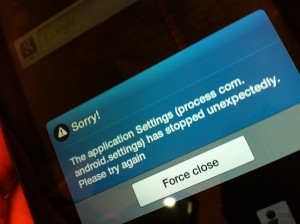 Normal for android? Not sure, and although this device comes with Froyo 2.2, we do know that Samsung has customized this OS heavily to make it yet another version of the OS developers must test their applications with.  Fragmentation a myth? It’s time for Adam Savage and mythbusters to determine if there is truly fragmentation with Android OS, or if this is all part of the Steve Jobs Reality Distortion Field!

Jamie Forestell is the Editor-in-chief and also the founder of Tek Tok Canada. His knowledge and aptitude for Technology led him to create a central website for all Canadians. His strong passion for the Technology world helps him stay abreast of leading-edge technologies and his desire to spread this information was the driving factor behind the creation of Tek Tok Canada.
@tektokca
Previous Microsoft to unveil a second Windows phone update at the Mobile World Congress.
Next Windows Phone 7 connector for Mac Updated