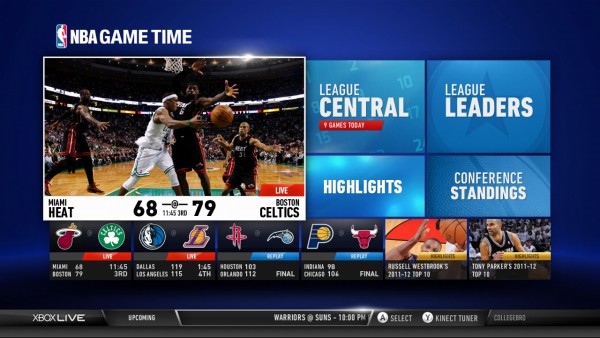 Xbox and NBA fans really lucked out today. Microsoft has launched NBA Game Time for Xbox and is available via Xbox Live as of today. You will need an Xbox Live Gold subscription to access content but you will not be disappointed. In the app, you will have access to live games with a nba.com League Pass, HD Replays, daily highlights, up to the minute stats on your favorite teams and players, stats & standings,  and access to control all of this via Kinect. As the season starts tomorrow, look to watch the NBA this season in a whole new light.

NBA Game Time for Xbox* launches in Canada today October 29 on Xbox LIVE. NBA Game Time gives Gold subscribers access to their favourite NBA action right from their Xbox and just in time for the 2013 season tip off on October 30th.

Dig deep with daily highlights from around the league and up-to-the-minute stats for your favourite players and teams. When you subscribe to NBA.com League Pass Broadband, catch every live regular season game in stunning HD, and your couch becomes the floor seats you always wanted.*

* Live Games, Highlights, and Replays in HD – You’ll have access to every live regular season game, in stunning HD. All the games are available in replay, so you can watch on your schedule. And, if you’re short on time altogether, watch the condensed game recap, or just take in the quick highlights.

* My Teams – Obsess over your favourite team and get up-to-the-minute stats on your favourite players. With NBA Game Time on Xbox 360, getting to the details is quick and easy. And to make sure you are in the know, add 4 other teams to follow.

* Stats & Standings – Want to know what’s going on around the league? With Stats & Standings, find out which team is leading a conference or which players top the leaderboards in scoring, rebounding, and more.

* Scores & Schedules – NBA Game Time on Xbox 360 gives you quick access to the scores you want and the schedules you need – right on your big screen. Spoiler Alert! Feel free to turn those scores off too – so you can catch up on your game a little late, without the spoilers.

* Mini Guide – The mini-guide gives you a quick preview of all of today’s games right at the bottom of your screen, and makes it easier than ever to switch between games.

* Split Screen – Watch two games at once, or watch a live game on one screen while you catch up with highlights or a replay on the other.

* Voice and Gesture Control with Kinect for Xbox 360 – Focus on the court instead of looking for the remote. Navigate through the games, skip to the next quarter, or play, pause, and rewind that buzzer beater, all with the sound of your voice or the wave of your hand.

With NBA Game Time, Xbox is taking live sports on TV to a whole new level with personalization features, deeper interactivity, and social connectivity found only on Xbox 360. Check out Game Time for free from October 30- Nov 6. For more information, visit www.xbox.ca. For information on League Pass visit www.nba.ca.

Jamie Forestell is the Editor-in-chief and also the founder of Tek Tok Canada. His knowledge and aptitude for Technology led him to create a central website for all Canadians. His strong passion for the Technology world helps keep him to stay abreast of leading-edge technologies and his desire to spread this information was the driving factor behind the creation of Tek Tok Canada.
@tektokca
Previous Nike+ FuelBand Makes It’s Official Debute in Canada
Next UFC 154 Live Coverage from Montreal