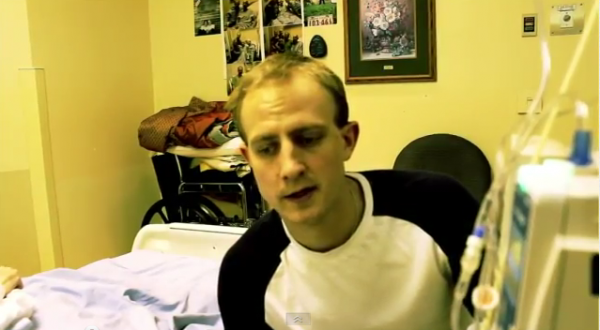 A video has surfaced on youtube posted by John Dick, who has returned to Alberta to visit his father.  His father Bruce, who is 58 yrs old, is suffering from terminal throat cancer and John remembers the memories spending time with his father as he was a young child. Together they would cuddled up cheering on the Edmonton Oilers.

Today, John begs the NHL to end the Lockout so he can live out one last wish…watching one more NHL game with his father.

“How do I feel about the situation in the NHL?” Dick asks in the video. “I hope that the doctors and nurses that keep my dad alive get a raise and that you guys get your asses back on the ice before it’s too late. Remember what we play this game for.”

Dick and his girlfriend both traveled from Australia last month and he had hoped to be spending these last few weeks watching hockey with his father.

So NHL, if you are watching John’s video on Youtube, lets get this season started and grant a son a wish.

Jamie Forestell is the Editor-in-chief and also the founder of Tek Tok Canada. His knowledge and aptitude for Technology led him to create a central website for all Canadians. His strong passion for the Technology world helps keep him to stay abreast of leading-edge technologies and his desire to spread this information was the driving factor behind the creation of Tek Tok Canada.
@tektokca
Previous Toronto Blue Jays: John Farrell, Perception Vs. Reality
Next Canadian iOS 6 Users Reporting High Data Usage – Possible WiFi Bug