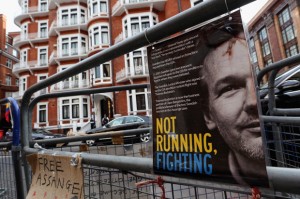 Julian Assange has been seeking asylum and is staying at the Ecuadorian Embassy where UK Police have started to form. The event is being broadcast via Ustream and currently has over 5000 viewers. Michael Moore has also tweeted to his followers of this historic event. Foreign Minister Ricard Patino said Britain had earlier in the day issued “a written threat that it could assault our embassy” if Assange is not handed over.

Patino also said he would be announcing whether Ecuador would grant the request of the Assange, who took refuge in Ecuador’s embassy on June 19 to avoid extradition to Sweden. Assange faces questioning there for alleged sexual misconduct.

You can follow the live feed below as things are heating up!

UPDATE #1: It appears the battery died on the cellphone being used to broadcast via Ustream. The videographer has announced he is looking to charge his external battery pack so keep checking back for the feed to come back online.

Jamie Forestell is the Editor-in-chief and also the founder of Tek Tok Canada. His knowledge and aptitude for Technology led him to create a central website for all Canadians. His strong passion for the Technology world helps keep him to stay abreast of leading-edge technologies and his desire to spread this information was the driving factor behind the creation of Tek Tok Canada.
@tektokca
Previous Blackberry Playbook Fire Sale Sunday August 19
Next Futureshop announces $149 BlackBerry Playbook Clearance