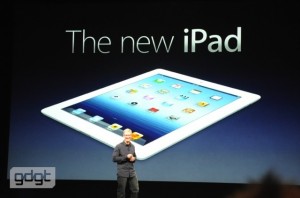 Apple has just unveiled the iPad 2 killer, the new iPad. Here is what we know:

We predicted Apple announce a launch date of March 16, and we were right! And for a huge change, the  new iPad will be launching in USA, Canada, UK, France, Germany, Switzerland, Japan, Hong Kong, Singapore, and Australia! Wow, this changes everything.

Prices are listed below  (same prices) and the new iPad will ship in both black and white:

Apple will continue to carry the iPad2 line starting at $399, so basically knock $100 off each model to get the price.  That puts some major pressure on Samsung, and the rest of the Android gang to compete.

Well folks, there you have it! The biggest IT news of 2012 comes and goes.  Will you be pre-ordering or lining up at your local stores?

Update: Bell has confirmed that only Bell offers both LTE and 42Mbps Dual Carrier coverage on the new iPad.

Former Founder of Mobile blog site MGauge.ca is the Managing Editor for TekTok.ca A smartphone fanatic which started with the iPhone 3G to multiple Blackberry and Android Devices. Willingly sacrificed an arm (and possibly a leg) in order to save his iPad 2.
Previous Ford making changes to MyFord Touch and Ford SYNC
Next Futureshop to carry the new iPad on launch day