In just under two months time, Canadians (and americans) can experience UFC like never before! You will be able to order UFC 140 and watch via your Microsoft Xbox 360. It gets better! Not only can you watch this much anticipated event on your Xbox, you can control it with Kinect.

You will have access to all the pre-fight coverage including the weigh-ins, interviews, event previews, and press conferences, and can also share your predictions with fellow fans on a friends’ leaderboard, only on Xbox 360. 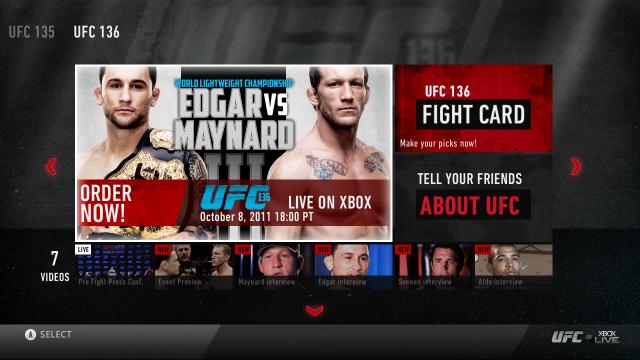 The event being held on December 10, 2011, takes place from our very own Air Canada Centre and features Lyoto Machida going up against Jon “Bones” Jones.  Several other cards include Frank Mir vs Minotauro Nogueira and Tito Ortiz vs Rogerio Nogueira!

Gonna be a great event and even better with HD Video streaming through the Xbox. You will be required to purchase the event as well as have Xbox Live Gold subscription if that wasnt obvious. UFC for Xbox 360 can be downloaded on December 1 if you want to prepare for the event early. For more information you can visit xbox.com.

Step into the Octagon and experience the energy of the Ultimate Fighting Championship like never before with the launch of UFC on Xbox LIVE on Dec. 1. Order live UFC pay-per-view events in stunning high definition, access a library of live and on-demand video content, connect with friends to predict fight results, compare fighter stats and records, and more,  all from one “ultimate fight centre” – your Xbox 360.*

The ultimate destination for UFC fans, UFC on Xbox LIVE will broadcast its first live pay-per-view fight, UFC 140, from the Air Canada Centre in Toronto on Dec. 10. Catch all the pre-fight excitement in one place with weigh-ins, interviews, event previews, and press conferences, and share your predictions with fellow fans on a friends’ leaderboard, only on Xbox 360.

Headlined by an epic light heavyweight title fight between the devastating Jon Jones and elusive knockout artist Lyoto Machida, and featuring the much-anticipated rematch between former heavyweight champions Frank Mir and Antônio Rodrigo Nogueira, UFC 140 promises to deliver a memorable night of action-packed fights to celebrate the premiere of UFC on Xbox LIVE.

UFC on Xbox LIVE provides the most in-depth UFC content available in one comprehensive location, including:

UFC on Xbox LIVE is your ultimate fight center. With access to live pre-event videos and a catalog of video on demand, Interactive Fight Card, and pay-per-view events in stunning HD all together in one place, UFC on Xbox LIVE brings the world’s fastest growing sport to fans, just the way they want it. For more information about UFC on Xbox LIVE, please visit: http://www.xbox.com/en-CA/Live?entertainment.

*UFC on Xbox LIVE will be available in the U.S. and Canada at launch. Live pay-per-view events sold separately. Xbox LIVE Gold Membership required for premium video content and some features.