TekTok was in attendance at HTC’s Design Day in Toronto yesterday, where we learned quite a bit about the overall process of building high quality smartphones and tablets the HTC way. On hand were various HTC representatives, PR people as well as Youenn Colin, the Manager of Design Strategy at One & Co. 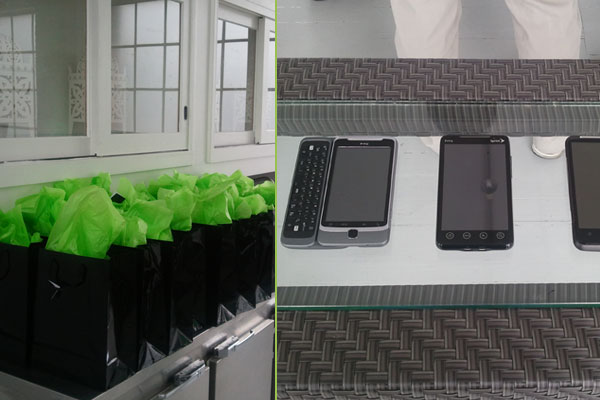 One & Co is the San Francisco based firm (which is wholly owned by HTC) tasked with both the UX Design and Industrial Design of most of HTC’s line of mobile devices. They are basically HTC’s version of TAT (The Astonishing Tribe, the Swedish UX firm RIM acquired recently to help revamp the company’s mobile interface design philosophy). Youenn Colin did a very informative presentation, walking us through HTC’s approach to mobile user experience, the attention to detail in both interface and physical design of their devices, as well as their firm commitment to superior build quality with unibody aluminum chassis, and usable everyday innovations like kickstands on phones like the EVO 4G. 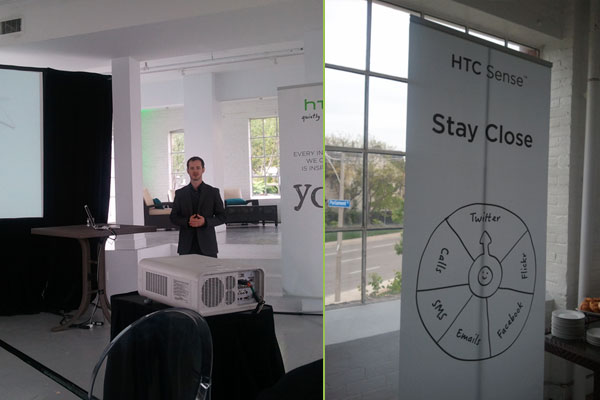 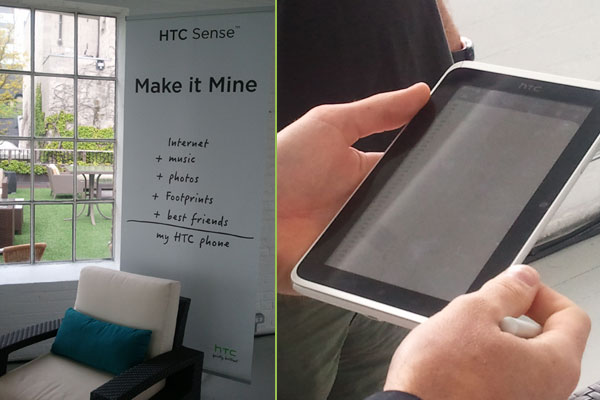 After the presentations, they fed us and allowed us to have hands on time with their current line of smartphones (all of which are available and on the market now). Phones like the Desire Z, EVO 4G, Desire HD, and HD7 were all there for us to play around with. But since these are devices we’ve all heard about and used before, the real attraction of the day was the HTC Flyer 7-inch tablet. The Flyer at first glance looks pretty small, especially if you’re used to 10 inch tablets like the iPad or Xoom. Walking up to the Flyer sitting on a table, it looks to be about the same size as a Kindle, and while the Kindle is feather-light, as soon as you pick up the Flyer, the differences become very apparent. While still thinner than say Samsung’s 7-inch Galaxy Tab, the Flyer feels heavier than it looks. It’s not like you can do bicep curls with it or anything, it’s not too heavy to hold for extended periods of time, but for it’s size you just kind of expect it to feel lighter than it actually is. 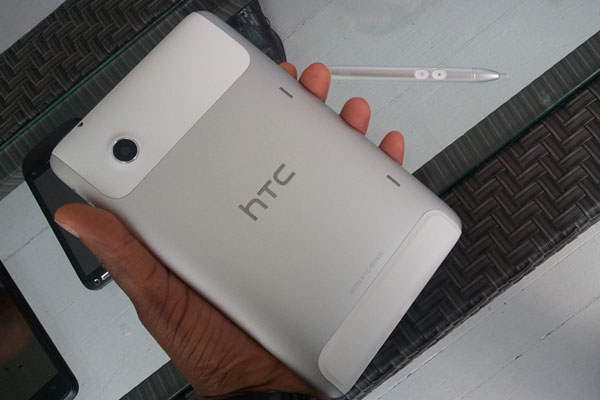 It’s made of  all white high quality plastics melded into a matte silver aluminum chassis. It follows the current contemporary tablet form factor made popular by the iPad with having the edges look really thin, but as you move from the tapered outer edges inward to the middle of the device, it gradually gets fatter where the battery and electronic guts are, creating the illusion that the device is thinner than it is (as opposed to something like a 7-inch Galaxy tab which has the same thickness no matter how you look at it). It’s a smart approach, and a design trend seen in most new tablets coming out. I actually applaud RIM for the BlackBerry Playbook in this regard, as it does not have the tapered edges and still manages to be a super thin tablet. 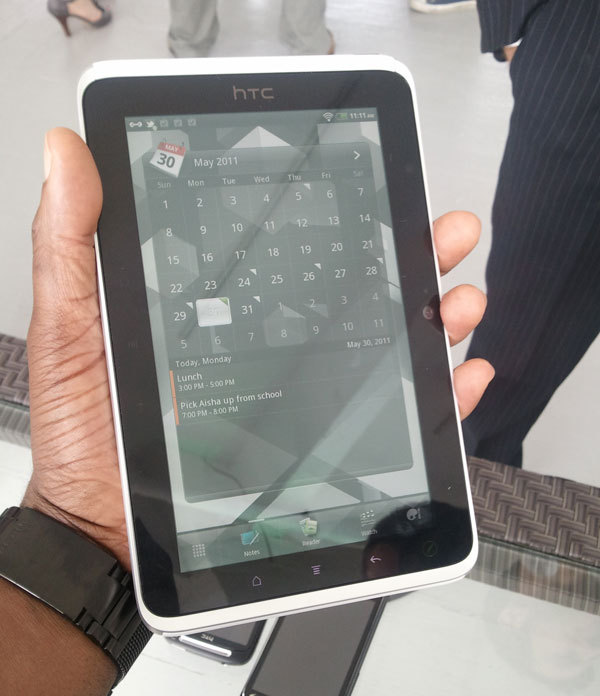 The key market differentiator with the Flyer versus it’s competition is the capacative stylus used to interact with what HTC calls it’s “Scribe” technology, allowing the user to take notes pretty much anywhere within the OS. You can even write hand written notes right on the desktop if you’re too lazy to open the note-taking app.

While the idea of a stylus on a capacative tablet is a good one, and opens up many new use-cases for a tablet in people’s lives (graphic artists, illustrators, short-hand note takers, engineers and drafts-people), the tablet DOES NOT COME WITH the stylus! If you want the sleek metal pen to get your “Scribe” on, you will have to shell out an extra $80 dollars (@ Best Buy in the US. No word on Canadian pricing when the Flyer arrives here)! $80 dollars. For a stylus. After spending $499 (again, Best Buy US pricing) for the tablet itself.

It’s hard to understand why HTC would go out of it’s way to sell this tablet’s Scribe functionality as the #1 feature that would make you want this over an iPad or PlayBook… but then make you pay extra money just to use that feature. Also, the Flyer does not run Honeycomb 3.0 or 3.1… it’s running Gingerbread 2.3, so you won’t readily have access to all the new tablet-based android apps that are currently available. While this is not meant to be an in-depth review of the Flyer (we will save that for when we get our hands on one directly from HTC to use for a few days), our initial observations yielded both positive and negative experiences. One key negative was what to do with the stylus when you don’t need it. It is significantly fatter than a ball-point pen, and there is no port or clip or place to slide the stylus into the Flyer. You’re just left kind of holding it, or putting it down on the nearest table. And putting down an $80 digital pen in random places is not the best idea, as you can be sure to eventually lose it that way (how many pens or pencils have you lost in your life? Exactly.)

At any rate, the event was an interesting look into the world of HTC and how they make their devices, but no matter who we probed for Canadian release dates and carrier information regarding the Flyer and HTC Thunderbolt (the LTE beast of a smartphone which is currently available in the States on Verizon), no one had any solid launch date info. Rogers is working on rolling out its LTE network as we write this, and it would be good to have some indication as to which LTE devices will be available once the network officially launches, but it is currently a mystery. We’d be willing to bet that the Thunderbolt will come here (most likely under another name) as it’s hardware that’s already manufactured and ready to go. We’ll just have to wait and see.