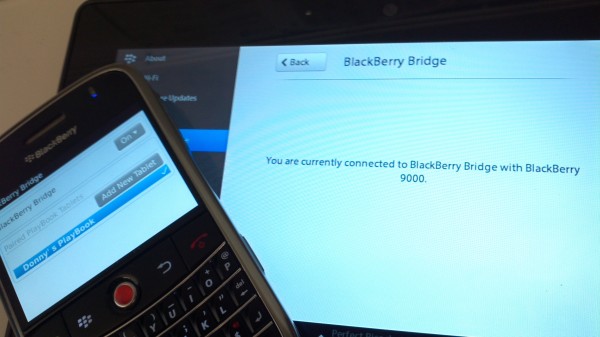 After successfully installing the BB Bridge app from the AppWorld, I was able to connect my Playbook and BB9000 without a hitch.  With the Bridge’s minimun requirement being at least BB Version 5.0, I was able to use an old Blackberry Bold for testing.

With a very slight lag due to bluetooth connectivity, everything else was working perfectly.  Access to your Blackberry device’s apps such as Messages (emails), Contacts, Bridge Browser, Calendar, MemoPad, Tasks, and BridgeFiles were flawless.  I was somewhat disappointed as I was expecting FULL access to all my apps including BBM and text messages, but I guess I can’t ask for too much.

The 7 new icons under the new heading ‘Blackberry Bridge’ are all synchronized with the connected unit to the Playbook. The ‘Messages’ icon grants access to all your email accounts which shows ALL emails by default.  As shown in the image below, there is a drop-down arrow that allows you to specify the particular mailbox you’d like to view at any given time. 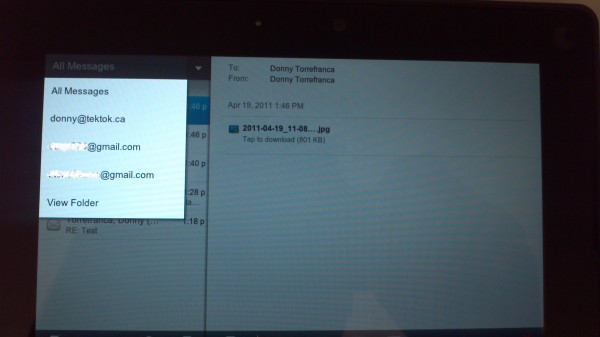 Bridge Browser: The Playbook itself has a native ‘Browser’ icon which is functional when connected to any hotspot whether it is via WiFi, Bluetooth, or USB connection.  However, when you are Blackberry Bridge connected, this new icon is also present along with the native browser icon.  I did not see any difference in functionality as they both work just fine when ‘bridged’. What makes it interesting is that the bookmarks are different from each other.  Which gives the impression that they are both linking to two different sources. To put it to test, I added a new bookmark on my BB9000 while it was bridged, but the bookmarks never updated on the Playbook. Neither Bridge Browser nor the native browser on the Playbook reflected this change.  A quick research online didn’t provide anything solid so I may have to get back to you on this topic as this develops, or if RIM decides to send out an official word on it.
UPDATE: After many more connectivity issues including my PlayBook appearing to get stuck in a loop after initializing connection. I can confirm now that the Bridge Browser is the only browser that works when the Playbook is Bridge with a Blackberry smartphone. Because of this, the Facebook and Twitter apps installed on the local Playbook did work. I’m interested to know if anyone out there is able to access those apps so we can perhaps narrow down the reason why mine didn’t work. I’d like to say it’s the fact that I am using a BB 9000 running OS 5 but I doubt the software has anything to do with it this time.

Bridge Files: Bridge Files is your typical Files Explorer found in your handset. The difference is that this only grants you access to your media card as opposed to also having access to the handset’s device memory folder. I tried taking photos while my two devices were bridged but it seems that the syncing still needs some polish as it didn’t take immediate effect as well. Perhaps I just needed to re-sync the devices by disconnecting and reconnecting the bridge…who knew it would do more harm than good?

1st crack at it: Three times today I needed to disconnect my bridge connection for different reasons. The 1st time I disconnected using my smartphone and highlighting the connection and selecting ‘disconnect’.  Without reading any manuals or how to’s, this sounded about right. 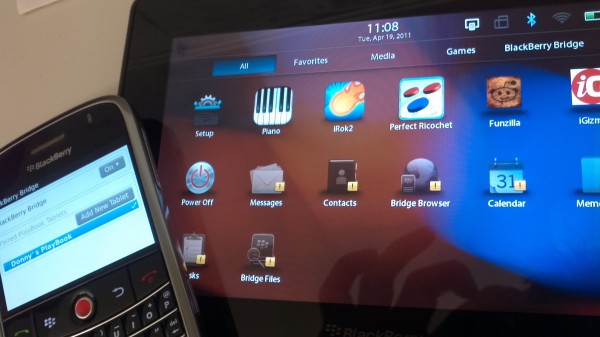 I came back thinking I can do the exact opposite and click ‘connect’.  After displaying a successful connection I was disappointed to see that I was still unable to access my bridged files and my Blackberry Bridge icons were locked up. No matter what I did, reboot one, reboot the other, retry scanning the connection, manual connection, disconnecting and reconnecting… it just wouldn’t budge.  Eventually, I rebooted both devices at the same time, and after retrying twice, it  connected.

The Second Time: After my painful experience this morning I had to disconnect again.  Dreadful, I tried a different way.  Still using the BB Smartphone, I went in to the Bridge app and instead of disconnecting and reconnecting, I decided to turn off Blackberry Bridge which then successfully disconnected. Upon my return, I was hopeful when I turned on my Blackberry Bridge.  I was not disappointed!  It opened fine, minus the fact that the icons were still locked even after showing successful connection but a quick launch of one of those locked apps immediately opened them ALL back up.

Three’s a charm: With my tried and tested process in hand I was beyond confident in disconnecting the two for the 3rd time. I followed the same process when I tried to re-sync by disconnecting after taking the photo-test (as  previously mentioned in this article). Same symptoms as above except now when I try to re-scan, manually connect, or simply re-connect the previous connection on the Playbook I get the message below. 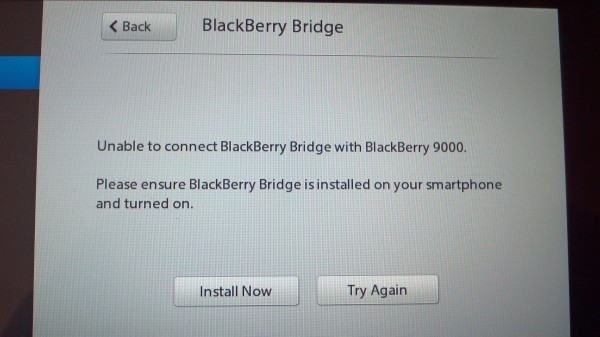 As I type this article, I continue to have troubles connecting the two.  I’m sure after I write this and devote my time into reconnecting them, I can figure it out.  And when I do find the sure-fire way to disconnect and reconnect, I’ll make sure to update this article.

Overall, I am impressed with the Bridge feature for Blackberry devices.  I was hoping that this will sway me into ditching my iPhone 4 and de-activating my 3G subscription for my iPad 2, but for now I think I’m staying put. The QNX Operating System running this wonderful device is filled with potential. I can imagine the Playbook being as common as a Blackberry phone in the Enterprise world. But before that happens, RIM developers have a little bit of tweaking to do to ensure the connectivity is as stable as what RIM’s “Blackberry” stand for.

Former Founder of Mobile blog site MGauge.ca is the Managing Editor for TekTok.ca A smartphone fanatic which started with the iPhone 3G to multiple Blackberry and Android Devices. Willingly sacrificed an arm (and possibly a leg) in order to save his iPad 2.
@@Cue_32
Previous Blackberry Playbook Hands On
Next Blackberry Playbook launch day sales may exceed 50,000