As the iPad 2 launched in Canada on March 25, online orders placed that day were delayed anywhere from 2  to 6 weeks. The first batch of shipments have left Apple as of April 8, and are expected to arrive on April 12.

Customers who did not want to wait hours (or in some cases days), took advantage of ordering online. The iPad 2 online sales went live at 4:00 AM ET on March 25, while retailers across Canada were not live until 5:00 PM.

Apple Stores and select retailers across Canada and the USA remain sold out while the demand remains high. According to BizJournal, based in Dayton Ohio, some retailers in the USA were sold out within 10 minutes, and have yet to receive a 2nd shipment. The iPad 2 launched in the USA nearly one month ago on March 11. 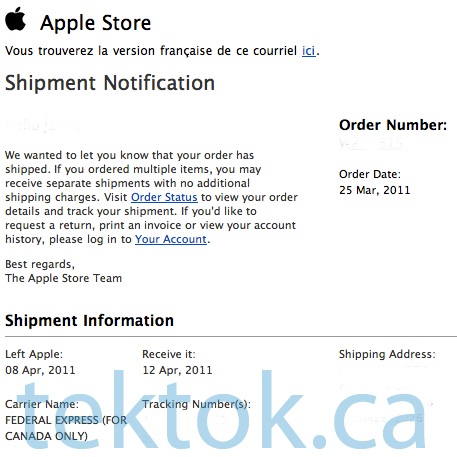 Digitimes reported earlier this week that Apple will ship approximately 2.5 million iPad 2 devices in the month of March alone. Were you one of those 2.5 million users? If so, are you enjoying the iPad 2? Do you find it better than the iPad 1?  Leave us a comment below.

Jamie Forestell is the Editor-in-chief and also the founder of Tek Tok Canada. His knowledge and aptitude for Technology led him to create a central website for all Canadians. His strong passion for the Technology world helps keep him to stay abreast of leading-edge technologies and his desire to spread this information was the driving factor behind the creation of Tek Tok Canada.
@tektokca
Previous Apple files patent for “Smart Bezel”, designed to change the way we interact with Touch devices
Next Google acquires iTunes-like Canadian mobile music App “PushLife”