iPad 2 to have thinner display and 512MB RAM

AppleInsider is reporting an insider has specification details on the upcoming iPad 2. According to sources, the iPad 2 will not offer a higher resolution screen, however will be 30-35% thinner, and offer much better experience in sunlight due to the anti reflection being used. The RAM is to be doubled to 512MB and the iPad 2 will boast a 1.2GHZ Cortex A9 Dual Core processor with an Imagination Technologies’ SGX 543 dual-core GPU (which is 200~300% powerful than iPhone 4.). This information is just as good as a guess right now, with sources close to Apple all claiming to have the details.

Only time will tell, but with this information, I am not sure 512MB RAM is enough for a tablet to compete with upcoming tablets. Even 1GB of RAM seems insufficient to be handling 1080P video files while maintaining the ability to multi-task. Especially given the fact, that Motorola has introduced a smartphone with 1GB of RAM. The sunlight performance improvement is much needed to be able to compete with one trick pony e-readers as they actually work in the sun, where the iPad is either unreadable or too hot to function. Stay tuned and hopefully in the next two weeks we will see Apple sending out invitatations to the unveiling of the new tablet.

All information above and below has been provided by Concord Securities. 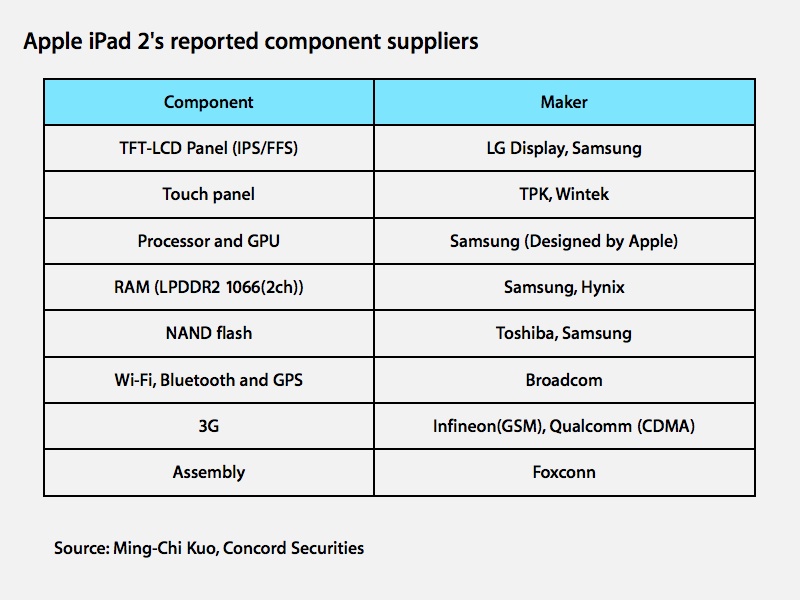 Jamie Forestell is the Editor-in-chief and also the founder of Tek Tok Canada. His knowledge and aptitude for Technology led him to create a central website for all Canadians. His strong passion for the Technology world helps keep him to stay abreast of leading-edge technologies and his desire to spread this information was the driving factor behind the creation of Tek Tok Canada.
@tektokca
Previous Motorola Atrix HD dock price appears on fommy.com for $59.95 USD
Next TekSavvy customers throttled by CRTC ruling